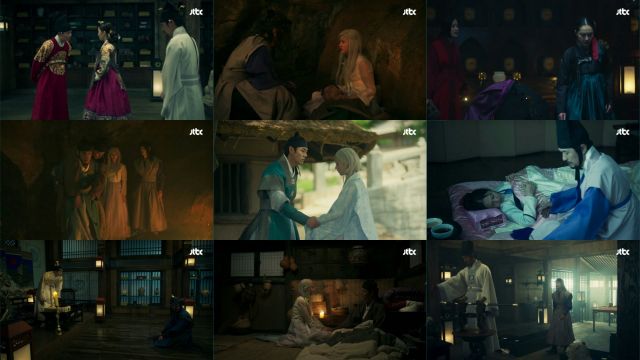 Predictably, Yeon-hee does not actually kill Gong-ju, although doing so would as always solve a great many more problems than keeping her alive for ill-defined ethical reasons. I always find it rather annoying when heroic characters act merciful only when it comes to the big boss. Poong-yeon surely must have killed at least a few members of Gongju's personal guard last episode. I heard slashing sounds.

Speaking of slashing sounds, characters brandishing swords at neckpoint has become such a common event in "Mirror of the Witch" I'm not sure it's actually a threat. The gesture merely seems to be a form of greeting intended to confirm that just because we can have a conversation doesn't mean I like you. My point being that this is exactly the kind of dramatic action that loses emphasis when overused. I mean really, on Heo-ok of all people?

But not all is worthy of mockery. The production team makes the rather sensible decision to actually show Jun recovering from his serious wound this time around, a process that is slow, painful, and terrifying. And yet Jun's willingness to stick with the process, and continue to trust and provide Yeon-hee with emotional support for all his obvious fear...well, it says a lot about his character. Jun has no conscious magical powers or fighting skills, yet he's consistently Yeon-hee's most valuable ally because the man is determined to stay in the loop with her.

It's a marked contrast to how incredibly bad every other character is at communication. Even Hong-joo has her weak points- a flashback shows how Hong-joo is in the awkward position of trusting Hyeon-seo's sincerity while doubting that he has any common sense. One of the better elements in "Mirror of the Witch" is that it has consistently shown how Hyeon-seo and Hong-joo can both be wrong in completely different ways.

Enough of the important information regarding the plot of "Mirror of the Witch" has been revealed at this point that there's thankfully a lot less to nitpick, which makes the drama much less annoying to watch. Min Dohee even managed to get me to crack a smile during her scenes, where she tries to solve all these spirit realm problems in her own way. While strictly speaking Min Dohee's character is kind of pointless, she's representative of a lot of the charm "Mirror of the Witch" has in its best moments, which are less about the story and more to do with character interplay.

"[HanCinema's Drama Review] "Mirror of the Witch" Episode 12"
by HanCinema is licensed under a Creative Commons Attribution-Share Alike 3.0 Unported License.