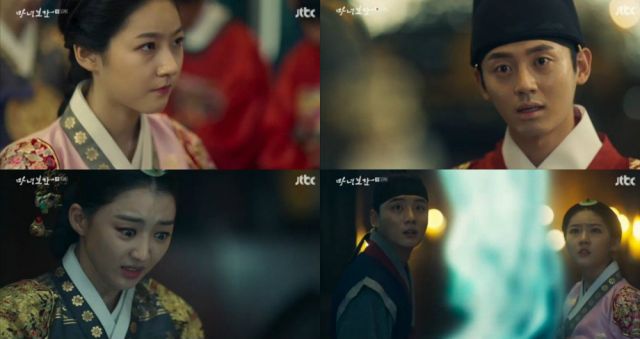 A tussel over the jar containing the spirit of Yeon-hee's departed brother defines the main conflict this this around, making it fairly easy to keep track of the story. But strictly speaking the only character with any particular reason to care about what happens to the jar is Queen Dowager Sim. Hong-joo only cares because she can use the jar as emotional leverage against Queen Dowager Sim, and everyone else only cares because they can use the jar to break Hong-joo's grip on power.

Ever since Hong-joo's flashback last episode I've been having trouble squaring her actions with her motivation. If Hong-joo's main objective were to survive, then why are almost all of her actions practically custom designed to antagonize powerful people? From the very beginning Hong-joo's decision to kill Yeon-hee's brother and steal his spirit seemed like a fairly questionable one. That one action on her part is the only reason people have been threatening to kill her so much lately.

Elsewhere, Jun manages to smooth over a lot of problems and help Yeon-hee out mostly by not being an idiot and actually telling potential allies what's happening instead of keeping secrets for no good reason. That's always the qualifier I seem to end up with when it comes to "Mirror of the Witch"- no good reason. There are almost always fairly clearly defined reasons for why certain characters act the way that they do, it's just that these reasons make them look pretty dumb, since they've been making the same mistakes throughout the drama's entire run.

It's completely counter-intuitive, for example, that Jun is Yeon-hee's best ally when he has by far the least knowledge concerning all the dark wizardy about which the plot revolves. But everyone else is too blinded by sentiment to even acknowledge past mistakes, let alone correct and learn from them. This sentiment is the only reason Hong-joo has been at all effective, because it lets her predict everyone else's actions.

...Put like that I guess that actually sounds like a pretty good theme. But "Mirror of the Witch" continues to annoy me on minor inconsistencies too. Jun is improbably good at fighting here considering that up until now he was mediocre at best. But hey, at least the costumes are nice. Yeon-hee's princess suit looks great. Oh, and a final word of warning- don't watch the preview. As far as I can tell it gives away every single plot twist of the next episode.

"[HanCinema's Drama Review] "Mirror of the Witch" Episode 13"
by HanCinema is licensed under a Creative Commons Attribution-Share Alike 3.0 Unported License.