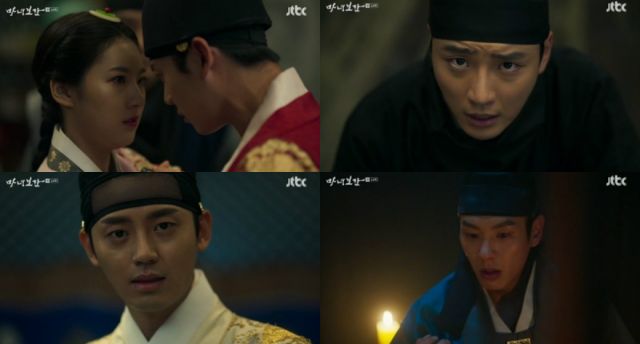 Now that the jar has been destroyed Hong-joo is forced to switch gears to her previous plan to maintain power- King Seonjo's physical illness. Which kind of begs the question of why Hong-joo ever even needed two plans in the first place. King Seonjo mostly liked Hong-joo back when he first invited her to the palace. Now he doesn't, thanks to all the politicking involved with Hong-joo's second plan. We can go back even further than that and wonder why Hong-joo needed to kill the crown prince at all since making him sick would have been a lot more efficient.

But whatever questionable twisty road led "Mirror of the Witch" to this point, one fact we now know for sure- it's up to Jun to save the day. The extent to which the supporting cast tends to be superfluous at best and outright antagonistic at worst is one of the usual frustrating spots of "Mirror of the Witch". Poong-yeon has somehow managed to not learn anything over the course of the drama's entire runtime, so we just have to hope he doesn't ruin things by being a complete idiot.

What's particularly uncanny is that Jun is the one forced to make political inroads with people who Poong-yeon actually knows personally. That Jun is the one who has to persuade Sol-gae to reconsider her allegiances is just plain weird. It also takes a quite a bit of luck and effort on Jun's part in order to hold council with King Seonjo, whereas Poong-yeon, who speaks to the regent regularly, just comes up with more bad ideas.

And he's not the only one. It's perplexing how Hyeon-seo is clearly at least partially in control of his own body, yet is unable to take proper counter-measures against Hong-joo's magic or even properly warn other people that he might randomly lose his own mind. Yo-gwang seems completely incapable of figuring out what to on his own, and is only helpful when following Jun's orders.

All in all Heo-ok is actually a more effective good guy than most of the actual good guys, because he's too incompetent to be of much use to the villains. Of course at this point his role in the story is equally as pointless, so that's not much in the way of praise. At least the story's winding down, but it really is discouraging to see Jun solve problems in mere minutes that other characters have failed to tackle for the entire course of the drama.

"[HanCinema's Drama Review] "Mirror of the Witch" Episode 14"
by HanCinema is licensed under a Creative Commons Attribution-Share Alike 3.0 Unported License.