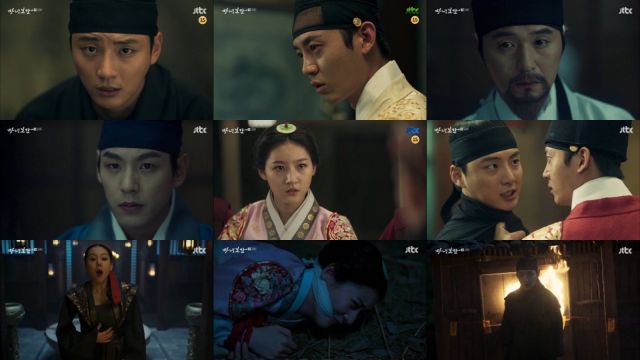 It suddenly occurred to me this episode that King Seonjo's decision to keep his sickness secret has never made a whole lot of sense. Like, if you're seriously morbidly ill and the regular doctor isn't cutting it, wouldn't it make more sense to start inquiring for other doctors than to just pretend the problem is going to go away on its own? King Seonjo should have been suspicious of Hong-joo from the get-go. How did she even know he was sick in the first place, let alone have any idea how to cure it?

I bring up this particular logical problem because Jun's actions this time are so excessively logical it's little surprise that they end up working. There is the usual moment of terror because apparently the only time King Seonjo thinks the royal guard is necessary is when he needs to push the main characters around. But I mean, really, Jun is able to solve big problems just by going to the library and doing some research, and it's not like he's the only character in this drama with a library card.

To be honest, though, I'm gonna miss King Seonjo's sickness because it highlighted one of the few consistent strong points of "Mirror of the Witch"- the makeup. The characters in "Mirror of the Witch" have always looked sufficiently supernatural. The special effects are more a supporting element, which is really where they belong anyway. Scary looks are almost always more frightening than scary action.

That's especially true in "Mirror of the Witch" owing to the lack of compelling context. Hong-joo was an intimidating villain earlier in the drama because her twisted logic has always made just enough sense that it could plausibly work on an emotionally insecure person. But repeated use of that plot device has ruined its plausibility. Hong-joo has been proven to be acting in bad faith so often at this point that no character should be paying any attention to her at all.

Alas, that's where the cliffhanger leaves us, with a final desperate action that can not and should not work...but it does anyway. I'm pretty numb at this point to the extremely contrived nature of the plot in "Mirror of the Witch", although I still can't help but feel disappointed that the story has become so roundabout. This drama started out as a fairly straightforward fairy tale- now it feels like a legal drama with made-up magical rules instead of real ones.

"[HanCinema's Drama Review] "Mirror of the Witch" Episode 15"
by HanCinema is licensed under a Creative Commons Attribution-Share Alike 3.0 Unported License.