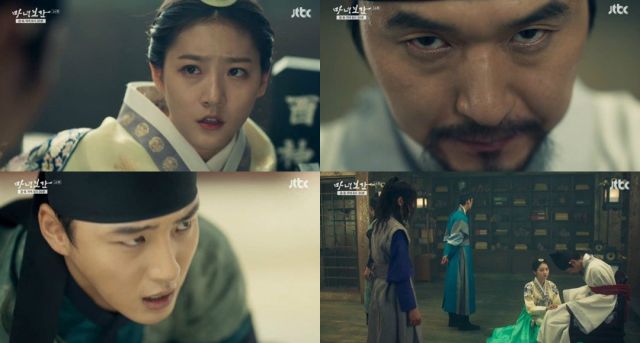 ...So apparently "Mirror of the Witch" is a twenty episode drama? I'd been assuming it was only sixteen. Not sure whether they added four while I wasn't paying attention or if it was just wishful thinking. Considering what little there is for any of the characters to actually do anymore, I'm at a loss for what's going to happen in even the next two episodes, let alone four. Exactly how many contrivances can the drama possibly come up with to keep letting Hong-joo get away at the last minute?

"Mirror of the Witch" has joined the dubious club of dramas that would have been improved substantially if it had made use of the "magical problem of the week" format to pad for time. We even had that with the wishing tree, from which we got to see exactly one wish. I guess the whole "people who use the wishing tree get murdered" aspect of that would have that plot turn a little gloomy, but it would be better than the repetition we got instead.

The excuse this time for why the characters don't just stab Hong-joo to death and be done with her is that apparently the spell she cast on Hyeon-seo has linked them such that he would die too, so Hong-joo has to be killed in a very specific way. Again, if we're taking Hong-joo at her word that the main goal is survival, why is she even bothering to fight anyone at this point? They'd stop trying to kill her if she stopped trying to kill them!

The only fig leaf rendering any of this at all comprehensible is the whole prophecy about how Yeon-hee will kill everyone she loves. Somehow. I really want to see the fine print on this prophecy because so far Yeon-hee has only been a risk to her friends to the extent that they tend to get in the way whenever Hong-joo tries to murder her. The last time we saw a non-Hong-joo related threat was way back on Yeon-hee's seventeenth birthday.

Maybe that's the direction "Mirror of the Witch" is going from here- get Hong-joo out of the way so that the heroes can deal with a bigger, more dangerous villain. Well I welcome that much considering a spectral entity will probably be a more convincing catalyst to Poong-yeon's horrific inconsistence. Poong-yeon, ladies and gentlemen, the man who can move untouched and unseen by countless guards but can't physically subdue a fifty year old woman.

"[HanCinema's Drama Review] "Mirror of the Witch" Episode 16"
by HanCinema is licensed under a Creative Commons Attribution-Share Alike 3.0 Unported License.