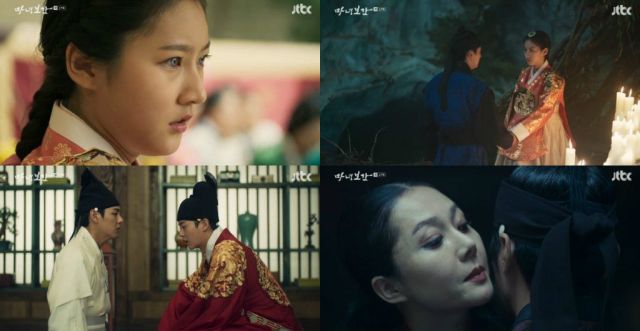 Hong-joo is in jail again, although we know from past experience that this doesn't really mean anything. "Mirror of the Witch" consistently makes a strong argument for a quick trial-less death penalty, not because Hong-joo is evil enough to warrant one, but because the drama takes place in this comic book universe where prisons are made out of cardboard and only serve to temporarily keep the villain out of the way until she's needed again in a few more issues.

There are hints of the greater curse which Hong-joo has been using to justify her actions. Unfortunately we never get to clearly see the curse do anything, mostly leaving the greater situation up to ambiguity. What's worse, without any kind of greater defined goals the main characters just sort of mill about at random. Yeon-hee hangs out with other characters in public, which would look a lot less strange if she weren't wearing her fancy official princess outfit.

Where are the guards? Every other scene a situation happens that could be solved by a royal retinue and yet King Seonjo has for whatever bizarre reason simply decided not to hire any. And when Yeon-hee inevitably has to take matters into her own hands to deal with regicidal assassination attempts she's the one who gets blamed for solving problems with magic. Why this is a big deal is unclear to me, since Hyeon-seo and Hong-joo were the official court wizards for what, a couple decades?

And speaking of Hyeon-seo, how is it that the characters came up with this big complicated plan last episode to free him from Hong-joo's magic, yet this time around they don't seem to know or care where he is or what he's doing? Although he's not the only one. Poong-yeon also has minimal screen presence. I know that from a screenwriting standpoint this is to surprise us when they return, but internally speaking why isn't anyone paying attention to these things?

So many basic logical problems have piled up in "Mirror of the Witch" by now that all I can see when I try to look at the story is a massive snarl. No one seems capable of remembering anything that happened to them in the past. The overriding feeling is constantly that, outside of Jun and Yeon-hee, the characters are just kind of dumb. In that extent maybe I should be thankful for the cliffhanger, which appears to leave them on their own for once.

"[HanCinema's Drama Review] "Mirror of the Witch" Episode 17"
by HanCinema is licensed under a Creative Commons Attribution-Share Alike 3.0 Unported License.