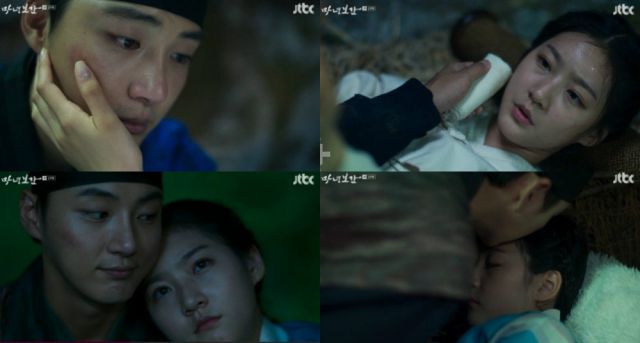 After Yeon-hee is predictably rescued due to a few convenient contrivances, "Mirror of the Witch" finally gets into serious material it should have been exploring a long time ago- serious self-reproachment. Progressing events have finally proven to Hong-joo that her theory regarding the curse is at best rather flawed, indicating that at minimum, Hong-joo is not as smart as she thought. She still has to act, but there's a terrified sense of weakness to the villainess now that limits her powers of persuasion.

This also works retrospectively. Without Hong-joo nearby to offer dark counsel, King Seonjo and Poong-yeon have difficulty maintaining the idea that they're doing what has to be done, rather than what seems emotionally satisfying. Literally speaking getting rid of Yeon-hee solves their own personal insecurities regarding family history. But they've finally come to realize that they were insecure sad sacks even before finding out that Yeon-hee was still alive after all this time.

I'm mainly relieved that "Mirror of the Witch" has actually addressed the general stupidity of its characters in a way that makes coherent sense. Really this should have started a lot sooner. Ideally it would have been a much more gradual process rather than having characters abruptly change allegiance every few episodes but at least these character arcs did manage to eventually come to a convincing climax, so we're on the same page as the production team.

The emphasis also helps to contrast just how radically different Yeon-hee's relationship with Jun is compared to every other character. While most of the cast has been focused on trying to prevent a vague ominous cataclysm, Jun has been focused on trying to keep Yeon-hee alive. Ironically enough it's Jun's ability to see the little picture rather than the big picture that makes him a much better long-term protagonist. Jun needs a good, logical argument to commit to anything dangerous. Anything else will just make things worse in the short term.

Other weaknesses in "Mirror of the Witch" are not so easily fixed by the move to internal character drama from complicated magical action. All the complicated magical action has been such that I do not have the slightest clue how the internal magical rules are supposed to work anymore, so I'm not completely sure what happened to Hyeon-seo and Poong-yeon this episode or why. But at least their characters make more sense, so there's a faint hope that "Mirror of the Witch" will at least finish strong.

"[HanCinema's Drama Review] "Mirror of the Witch" Episode 19"
by HanCinema is licensed under a Creative Commons Attribution-Share Alike 3.0 Unported License.