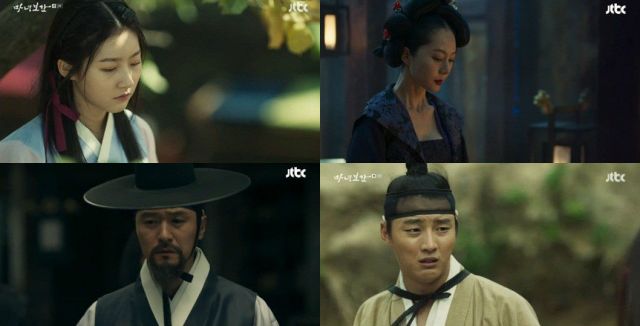 Jun (played by Yoon Si-yoon) is the devil-may-care lead in "Mirror of the Witch". He always seems to be either the victim or perpetrator of some elaborate scheme, and ultimately gets dragged into the story by getting called out on and accepting a childish dare. It's through this happenstance that Jun meets Yeon-hee (played by Kim Sae-ron), the cursed princess who has managed to attract attention to herself magical barrier notwithstanding.

First and foremost, I really like the cast in "Mirror of the Witch". Yoon Si-yoon especially manages to strike an almost perfect balance between charming and incompetent, with just barely enough sense of moral resolve to remain fully sympathetic. The cliffhanger is among the funniest I've ever seen because it is so very much in character for Jun to bring a disaster upon himself unnecessarily only to inevitably survive entirely thanks to sharp thinking and sheer dumb luck.

Kim Sae-ron is also her normal excellent self, with a naturalistic performance that's difficult to visualize from any other possible casting choice. The entire scene where Yeon-hee tries to mimic "normal" behavior is absolutely beautiful, and I'm not sure an older actress would have been able to convincingly pull it off. Yeon-hee comes of alternately as a petulant child and an affectionate younger sister, which is entirely appropriate given her character backstory.

On the most basic level "Mirror of the Witch" is a version of the Rapunzel story, with the main intriguing twist being that there is in fact a perfectly good reason for Yeon-hee to be locked away in her prison. What's more, Yeon-hee seems willing to take it on faith that at some point she will be allowed to leave and do other things. In the meantime, though, Yeon-hee seems fairly well-satisfied with her limited life, and it's really going to stink when all of that ends up going disastrously.

"Mirror of the Witch" is so far doing everything that can possibly be expected of a fusion costume drama very, very well. Writer Yang Hyeok-moon is cherry-picking the best tropes from a wide variety of adventure and fantasy dramas to craft a story that's engaging, familiar, yet also promising of surprises around nearly every corner. With so much of the supporting cast yet to be introduced, I find myself wonderirng mainly what important role they're going to play in the disastrous events to come, and who's going to start ruining which plan.

"[HanCinema's Drama Review] "Mirror of the Witch" Episode 2"
by HanCinema is licensed under a Creative Commons Attribution-Share Alike 3.0 Unported License.