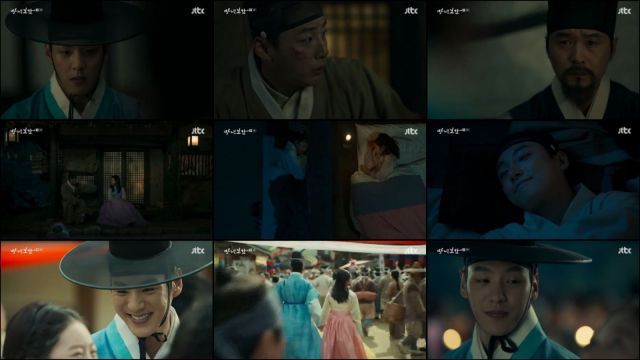 Poong-yeon (played by Kwak Si-yang) loves Yeon-hee like a brother. Consequently, Poong-yeon is far more frustrated than Yeon-hee about her seclusion, particularly because Hyeon-seo (played by Lee Sung-jae) refuses to explain in clear detail why exactly Yeon-hee requires such elaborate protection. I have a sneaking suspicion that we don't have the full story either- whatever dark magic force keeps hounding Yeon-hee is evidently beyond the power of both Hyeon-seo and Hong-joo.

But let's get back to Jun, a character who as far as we know possesses no magical ability whatsoever. What's he got to do with the plot anyway? Mostly just perspective. In a clever reversal on the usual Rapunzel tropes, writer Yang Hyeok-moon actually makes Yeon-hee among the more sensible level-headed characters precisely because she lives in isolation. If Yeon-hee is ever in doubt that the world beyond is a dangerous place, she only needs to walk to the perimeter and listen to all the wild animals howling.

The nighttime discussion between Yeon-hee and Jun best illustrates this. Note how Yeon-hee is bathed in light whereas Jun is shrouded in darkness as they debate the merits of conservative behavior. If Yeon-hee's apparent upper hand in the discussion were not evidence enough, look at what happens when Jun comes down from the mountain and inevitably chooses personal pride over self-preservation.

This is an important thematic point and I'm impressed with how "Mirror of the Witch" manages to make Jun's behavior look foolish even in context, when Heo-ok (played by Jo Dal-hwan) does his very best to be an unnecessarily antagonistic jerk. "Mirror of the Witch" takes place in a deadly serious world where magic is only one of many possible ways for a person to die a horrible death. It's why Yeon-hee is lucky people are protecting her and Jun suffers because no one looks out for him.

This delightfully subversive storytelling is a major highlight in "Mirror of the Witch". Director Jo Hyeon-tak transitions seamlessly between high-stakes setpieces and light humor, reminding us that the situation can change in an instant. There's little sense gratifying an immediate desire for satisfaction when in the long run, brutal punishment awaits those who challenge the established order. The preview, filled as it is with intense spoilery action, should probably be avoided. But it does remind us of another important point- Hong-joo is dangerous less because of her magical abilities, and more because she has access to an army.

"[HanCinema's Drama Review] "Mirror of the Witch" Episode 3"
by HanCinema is licensed under a Creative Commons Attribution-Share Alike 3.0 Unported License.