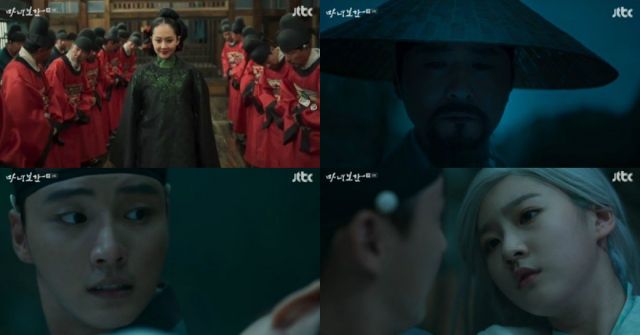 Jun leaves the custody of Yeon-hee's hideaway to find that the situation has deteriorated quite a bit in his absence. Heo-ok's ridiculous charge of Jun being the local serial killer unfortunately still has traction, since whoever is actually responsible for the murders has evidently scoped the situation and realized that Jun is a very convenient scapegoat. Considering the bigger power struggles we know are at play, Heo-ok's petty act of revenge is likely to have long-standing consequences that may well end in his own death.

One piece of very bad news is already afoot- Hong-joo has returned to the palace. What's really funny is that it's hard to think too poorly about King Seonjo for making this possible. To date Hong-joo is the only person who has actually been able to solve any of King Seonjo's problems. Granted, it's more than likely that Hong-joo was somehow responsible for causing these problems in the first place. Even so, Poong-yeon has not been the most competent character lately.

...Or ever, come to think of it. The general incompetence of most of the leads in "Mirror of the Witch" is a nagging problem for me. It wouldn't be so bad if they were capable of learning from their mistakes. For the most part, though, they don't. Not that this is entirely their fault. Even at the halfway point so much of the actual story in "Mirror of the Witch" is clouded in mystery that there really isn't very much for them to react to or learn.

Consider how even though Jun has been marked with some sort of supernatural emblem, it's still not clear what this emblem actually does or means. So when Jun gets into a jam he has to resort to what experience has taught him- being a card sharp and cross-dressing. While these scenes can be amusing they vastly limit Jun's ability to have any kind of influence on the main plot, where even basic fighting skills tend to be a lot more helpful.

I don't really have much faith that the story in "Mirror of the Witch" is going to progress any more convincingly than characters simply discovering vital plot tokens at random. Writer Yang Hyeok-moon is too engrossed in the greater mystery of "Mirror of the Witch" to realize that in the more immediate sense, putting proper effort into answering small questions would be a lot more satisfying.

"[HanCinema's Drama Review] "Mirror of the Witch" Episode 8"
by HanCinema is licensed under a Creative Commons Attribution-Share Alike 3.0 Unported License.