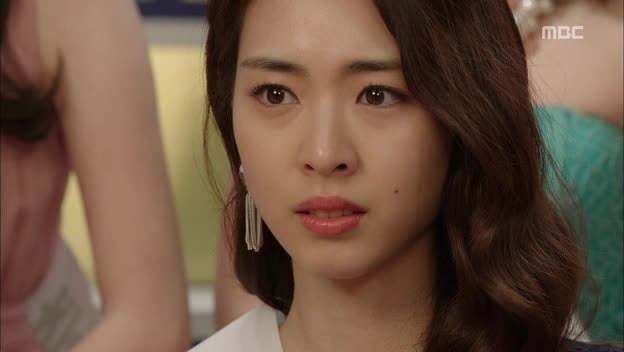 "Miss Korea" now has its characters contending with the harsh realities of competing in a beauty competition for money and prestige: everyone is out to get a piece of pageant pie and will do anything to get it. In the middle of the fray is Ji-young who has no shortage of enemies, but who also has a team of support surrounding her.

Seon-saeng is truly one of Ji-young's supporters now. The makeshift team that has banded together to make Ji-young Miss Korea has become his family. Hwa-jeong is the center of that family. She sees through his bravado and helps others to do it. Sometimes all it takes is one person to change a life, and Hwa-jeong is doing that for Seon-saeng.

Then there is Ji-young's real family who always provide some of the best moments of each episode. They care for Ji-young, support her and have amazing chemistry as a foursome: gramps (Jang Yong), dad (Jung Kyu-soo), uncle (Jung Suk-yong) and brother (Baek Bong-ki.) Sometimes I get lost in the trappings of the show: the romance, the pretty faces, the monetary crises. It's good to have a solid family unit to turn to for some warm feelings and good family humor.

With that said, the heavier aspects of the show came back to haunt the show, namely the loan sharks out for Hyung-joon's life and Ji-young's lecherous boss from the department store. While their presence in the show is less than pleasant, their reappearance strengthens the plot by making sure their roles didn't become loose ends. The presence of loan sharks is something prevalent in South Korea, especially since the IMF crisis, and many women have to deal with sexually-abusive bosses. These are issues I like to see addressed, so hopefully they will be addressed in socially pertinent ways.

Another issue that is handled well in "Miss Korea" is the idea of corruption. Ma Ae-ri and Hyung-joon have different ways of dealing with it because they perceive the Miss Korea Competition differently. Neither are right or wrong, but the conflict of values is juicy plot stuffs and should've been a stronger concept from the beginning of the drama. Ae-ri puts the competition on a pedestal and wants it pristine for integrity's sake. Hyung-joon wants Ji-young to have a fair shot, which won't happen with all the bribery and political string-pulling going on. Jae-hee's father, who is running for president, is an interesting character because he illegitimately fathered Jae-hee and is dealing with the consequences of hiding her and her mother to save his political career. One of the strongest character explorations is that of Jae-hee (played by the wonderfully intuitive Ko Sung-hee) and how she deals with being a child her father denies and is ashamed of.

Suffice to say, the second half of "Miss Korea" is much stronger than the first. Rather than taking a few episodes for set up, "Miss Korea" felt like it took ten. Now that it has gotten going, the watching experience is much more fun.