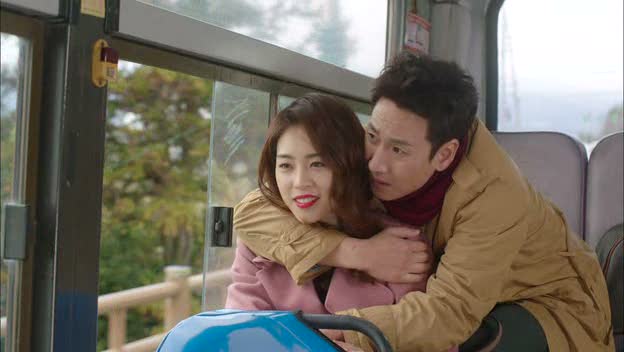 Although Miss Korea gives off a dark feel because it's set in 1997 during the IMF Crisis and because of the rocky relationship between all the main players, the drama still breezes by. It doesn't have much substance despite all the stakes that have been and continue to be set.

The show is relying on character development because the plot is weak. The world of the beauty pageant is slowly being revealed, but the fierceness of the judging and competition isn't yet felt. Hyeong-joon has been given two rivals, Ma Ae-ri and now Yang Choon-ja (Hong Ji-min), and yet his situation doesn't feel dire. Same with Ji-yeong. Her sorrow is relatable. She is poor and insecure and badly treated at work, but her story doesn't truly resonate. Strangely enough, the loan shark failure Teacher Jeong is the character who packs the most punch.

Because of the IMF Crisis, most of Asia (and lots of the world) are suffering financial ruin. People are desperate like Hyeong-joon and his company. Or, like Seon-saeng and his company of cutthroat loan sharks who become even more ruthless in a time when everyone is suffering. Seon-saeng, despite being a scummy loan shark, is a good man. Lee Sung-min wrings emotion out of every second of screen time he has. His character Seon-saeng hates his job, hates his life, and is too soft-hearted to really be in the line of work he's in. His tenderness towards the suffering Go Hwa-jeong (Song Seon-mi), a researcher and close friend of Hyeong-joon's, is all the more endearing because of his nasty situation.

I wish the other characters had been as clearly and cleanly established as Seon-saeng. Some of the fine writing of his character can be seen in the rocky relationship between Hyeong-joon and Ji-yeong, but it's not enough. Some of that is due to the pacing, the extremely slow reveals, long flashbacks and indulgent dialogue. But these same flaws also work in favor of the show. It helps establish the feeling of being in 1997 along with the muted color palettes.

What Miss Korea has going for it is potential, like I said last review. Hyeong-joon and Ji-yeong have a long way to go to repair past wrongs and the current deceptions they are now playing on and that could be a major intrigue of the show. I'm also interested in Ma Ae-ri and why she is so keen on Miss Korea. Like Seon-saeng, I feel that she has a lot of turmoil brewing under the surface that will be interesting to explore.

While Miss Korea looks like it could be a good show, it's not good yet. Lots of plot fodder has been thrown at us and yet it feels like very little has happened. Many characters have been introduced, but most of them are just a blip on the radar. Lee Yoon (Lee Ki-woo) has had only a handful of scenes and seems like he will be an important player. For set up episodes, the first three episodes haven't done enough. I'm still waiting for it to pick up the pace.