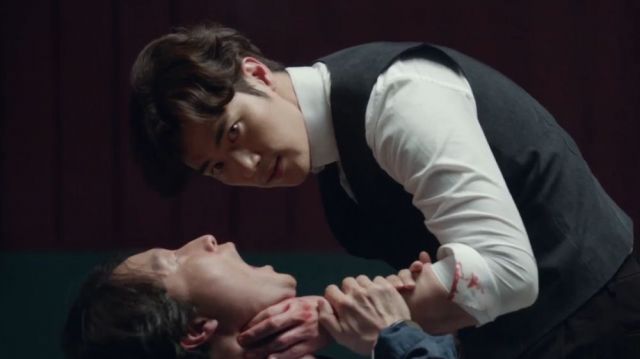 While crime shows are in general more realistic and handle more dire topics than for example fairytale romances, they do not necessarily explore their stories more deeply. Crime fluff does exist and has its own tropes that also become clichés. OCN has delivered many good dramas, but had not gone the extra mile into meaningful stories with a theme. Until 'Missing Noir M' came along. A show which elevates its genre and becomes a milestone for the channel's drama output.

Gil Soo-hyeon (Kim Kang-woo) is a former FBI agent and highly intelligent, highly educated person who has returned to South Korea. He is asked to lead a special missing persons unit which will handle only the most difficult cases and those of great importance or interest. His crew consists of Oh Dae-yeong (Park Hee-soon), a regular detective trying to climb up the ranks and Jin Seo-joon (Jo Bo-ah), a computer and cybercrime expert. OCN dramas usually have satisfactory production quality, but it is rarely exceptional or in some way noteworthy. 'Missing Noir M' is a definite improvement on that, presenting very high quality material which is engaging, which elevates its already good writing and really increases the show's value. The music is worth mentioning, as its importance to a production is something which a lot of creators overlook and something which is beautifully done here. The cast is also very smartly chosen, for the leads and also important guest appearances.

Where most such shows would have some form of moral or message in each individual case, few have an overarching theme. The drama lacks a main plot for the most part and what little of it exists is more in character development and an ending created to leave things ready for another season. However, the show has clear concepts it explores and does so skillfully. More than mystery or crime, it considers what unfairness and the pursuit of justice do to us. It challenges viewers with difficult and often very depressing moral choices and outcomes and has memorable characters and stories to carry them.

As involving, thought provoking and interesting as this is when it happens, the series is off to a slower start and one more in keeping with the usual crime fare. It takes almost half of it to start developing the characters and the relationships between them, but also start going deeper into its moral ambiguity. That is not to say the show is boring until then, but its first four episodes pale in comparison to the rest when it comes to its focus on the human and therefore compelling element. Another issue is that, while two of the members in the team have an interesting relationship and interactions, the drama's female lead is not given as much focus. She has her own episode and own story, but her role in the group and its more personal issues is limited and also takes a while to really develop. This leaves her a more generic character for the most part and it harms the otherwise strong group dynamics and emotional drama.

'Missing Noir M' is nothing short of a great series. It is not without its flaws and it takes a while to really settle into its routine and also poignant ideas, but it is worth one's time for what it accomplishes. It is a very gripping and exciting piece of television with important things to say and show. OCN has done well and 'Missing Noir M' is an example to follow in the future.