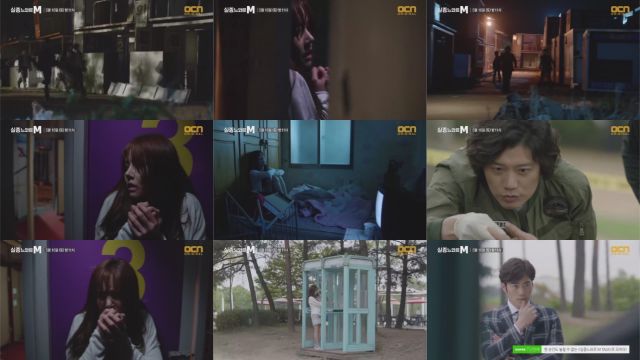 Thirty years ago a mother lost her daughter. Miraculously, they were recently united, and their familial ties were confirmed on national television. Then the adult daughter disappeared again. "Missing Noir M" makes one thing clear right away- she was being chased by some sort of gang. The detectives don't see this information directly, but it's not actually much of a deduction. The continual question here is just- why?

That's a good question to ask, because as I've mentioned, the depression involved in "Missing Noir M" has gotten to be a tad much. I am imminently relieved to get a mystery that goes back to the multi-part format of the earlier episodes. For one thing, it keeps the focus consistently on the mystery. The clues constantly hint at a more complicated story, yet what this story could be is tantalizingly kept out of focus.

One thing is clear- we're dealing with actual villains this time. There's not going to be any last-minute revelation about noble motives. The woman who's disappeared does seem to have a reasonably sympathetic life situation. Yet once again, how any of this ties together is just sort of perplexing. Given that a scam was perpetrated, who could possibly benefit from a police investigation that would inevitably bring these facts to light?

Another mystery is the broader context. Given the extended recap provided at the start of the episode, we might expect that Soo-hyeon's backstory is going to factor into all this somehow. And yet for the most part, the main important establishing fact in that department is the relationship between Soo-hyeon and Dae-yeong has turned icy. Rather than seriously interact with his more intelligent co-worker, Dae-yeong mostly just hangs out with Joo-yeong while they try to figure out what to make of the hand.

Even if there's actual story reasons for this turnaround, it also shakes up the mystery somewhat by making the thrust less on proper collaboration and more on putting the pieces together probably. We get to see the overall team's individual talents established more clearly and distinctly- something that's all the more important if we're about to see a shift in storytelling that makes these characters important as individuals rather than functioning members of the same team. This has been a very bright turnaround for "Missing Noir M", heading back into territory that for me, at least, is more resonant than what the drama's been putting out lately.