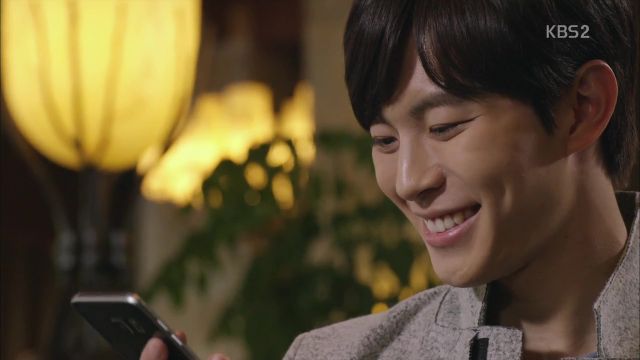 KBS's "Moorim School" hit the ground running on Monday, January 11, 2016. The twenty episode drama directed by Lee So-yeon-I ("Prime Minister and I", "Ad Genius Lee Tae-baek") and written by Yang Jin-ah ("Vampire Prosecutor") began its run with a busy introductory episode. There were plenty of abs, pretty faces, action sequences, and enough dramatic back stories to fill any drama quotient.

Lee Hyun-woo plays Yoon Si-woo, a gifted idol with a stand-offish personality and less-than-spectacular relations with his management company. There is something mysterious about him beyond his idol facade - a bit of the mystic floats about him and his deteriorating hearing. Si-woo quickly makes enemies with the entitled, illegitimate son of a hard-hitting Chinese business mogul, Wang Chi-ang (Hong Bin). Through various circumstances, both boys are pushed toward attending the Moorim School, a place that can only be found by magic. Along the way, they often find themselves shirtless (a clear ploy to please viewers), in trouble with paparazzi and Chi-ang's strict father, Wang Ha-o (Lee Beom-soo). These incidents lead to cheesy fight and chase scenes that somehow fit the overall hectic tone of this opening episode.

The two female students, Sim Soon-deok (Seo Yea-ji) and Hwang Seon-ah (Jung Eugene), both attend the Moorim School and have exceptional fighting skills that entangle them with Si-woo and Chi-ang. The ladies lend themselves towards some welcome comedy, especially Soon-deok who is played with panache by Seo.

Save for the set-up of the four main student leads, the Headmaster of the Moorim School, Hwang Moo-song, remains shrouded in the unknown as does his school, which is literally shrouded by a magical invisibility cloak. The reveal of his school at the end of the episode was, to put it bluntly, "seriously cool". It made the frantic happenings of the episode worth it. The school, from what little we know, is comprised of international students and teachers, deals with martial arts training, and is a place that can heal Si-woo's affliction and tame Chi-ang's wild streak.

This episode was little more than introduction and fanservice. Hong Bin's idol group, VIXX, sings a couple of tracks. He showed off his abs along with Lee Hyun-woo. But there is more to their characters than the visuals, which the episode did manage to establish. I'm waiting to delve more into the characters and how the Moorim School will help them overcome their issues. I'm also interested to see how the international cast is used because foreign actors tend to be relegated to stereotyped roles. Bring it on, "Moorim School". I'm ready for you.