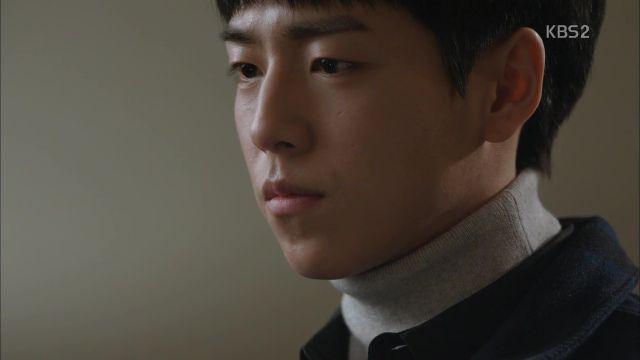 Dare I say it? I do believe this show has gotten better. There is still a fair amount of brooding and staring, but even so, the characters are actually beginning to express their thoughts and emotions rather than make us guess.

Everyone is at the Moorim School for a reason. Chi-ang because of his father's personal intervention and interest in the power of the Chintamani. But he also is driven to succeed and win his father's approval that has been withheld for all of his life. It seems he is just a pawn, but watching Chi-ang be driven rather than wandering aimlessly is quite the change. He may not become Si-woo's enemy depending on the decisions he makes. It's still too early to tell.

Seon-ah wants to learn her father's secrets, and through those her own. She feels drawn to the stories of the Chintamani and to Si-woo with whom her relationship continues to strengthen. She, like Chi-ang, is struggling to find herself.

Si-woo is also trying to find himself, but its different than Seon-ah and Chi-ang who seem to be lost without the answers. Si-woo seems to be comforted by the fact that he simply has a path to walk that feels right. It's a more mature and secure approach that mirrors the actions of his father. Perhaps that maturity will help Chi-ang take a step back from his blind push forward to win his father's fickle affections. Their friendship has been poorly cultivated the past few episodes and the audience has been expected to infer their caring and pain. I much prefer the method used this episode: the actual exchange of words to express feelings.

Soon-deok, the hard-working poor child, has finally told us what her true goals are: to stop working so hard to please her stubborn father and live a bit for herself. Her father's story is directly related to Moorim, Si-woo, Seon-ah, and Chi-ang. Normally such tie-ins would drive me crazy - making each character related to every other character. But in this case the school purposefully draws its own back to its heart.

I still yearn for more of the teachers and other students. They're all an interesting array of characters. Choi Ho was kicked out and strangely never heard of again although he can't have been the only student to feel inadequate. Yeop Jung continues to be a jerk without any rhyme or reason. Frankly, it's just annoying.

I look forward most to the friendship between Si-woo and Chi-ang, and how it grows and changes because of their personal challenges, and because of their mutual challenges. To show that they actually need screen time together rather than having them brood and have the camera take handsome, shadowed face shots. Here's to next week's episodes that will air as normal.