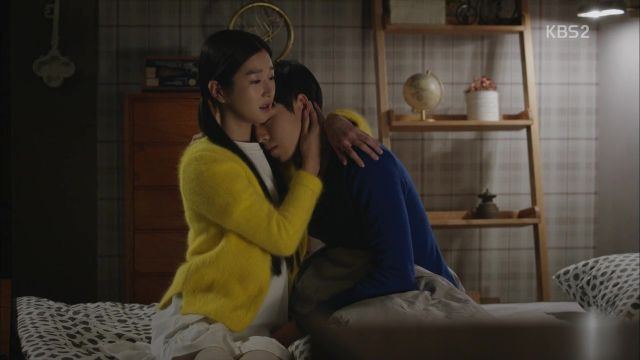 It's episode 15 for "Moorim School" with one more episode to go. The search for the Chintamani is an all out race to the finish. Most of the secrets hidden within the school and the hearts of its inhabitants have been made public. Chi-ang's father manipulated him into the enemy of the school and Si-woo discovers his true role in all of this. Chae Yoon, Si-woo and Seon-ah's father gets to jump in and play a bigger role as well.

Chi-ang's character, if the writer chose to make him Si-woo's enemy, should've done it sooner. I would've loved to have seen them truly battle it out against each other. Fighting over a girl in this rather pathetic way isn't enough impetus to turn the two friends against each other, especially when Chi-ang's reason for hanging on is so silly. His situation is great: pitting father against friends. But the story was build on a weak foundation anyway.

Then there is Si-woo who is nearly omniscient in one episode and breaking down the next. I appreciate that he has changed over time, but his mood swings don't fit how gradually his character has changed until now. That and his reaction to finding out he has a sister was totally anticlimactic. I was so disappointed. He's been yearning for family and that's all we get? His sister, Seon-ah, has a much more satisfying storyline. She suffers and comes full circle,

We also have quite a variety of tropes played out in this episode. Soon-deok separating from Si-woo in her attempt to be a noble idiot. Dean Hwang gets stabbed saving his friend and they trade a lovely dialogue while he's bleeding out. Two boys cock fight over a girl who has run away.

I suppose I'm most disappointed that the show was merely antics and tricks. It had fights and high-intensity music. There were big family reveals and friends at each others' throats. But none of it felt sincere and deep. I think Chi-ang needs to step out of his delusion of needing to man up for Soon-deok or prove himself to his dad. He needs to do it for himself.

The last episode will probably have the family pieces fall into place and have Chi-ang and Si-woo find themselves (and their friendship.)