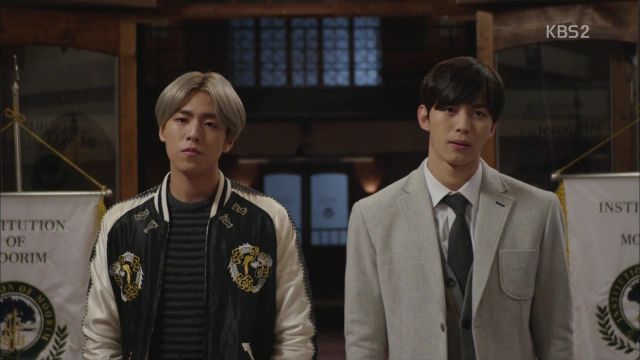 It finally hit me in episode 3. "Moorim School" reminds me of a Taiwanese drama mashed together with a manga adaptation. It's not meant to be taken too seriously and with that thought in mind the show becomes more fun to watch. It becomes an episodic adventure of enemies turned allies and how those around them learn to accept them despite their blatant personality failings.

Those two enemies, Chi-ang and Si-woo, are both egotistical young men whose intense personal circumstances have shaped their prickly exteriors and isolated them from socialization typical of their age. Despite their differences, the school will help them step out of their isolation caused by social and emotional damage, Chi-ang's by his social illegitimacy, Si-woo by his idol status. Their forced cohabitation at school leads to several insights into each other. Si-woo realizes how hard it has been for Chi-ang to live as an illegitimate child and suffer gossip, and Chi-ang realizes that Si-woo has lived under similar scrutiny as an idol.

The insight doesn't yet inspire friendship, but it does foster understanding between the boys who don't practice empathy. Unfortunately it doesn't do so with many of their classmates who don't take well to Chi-ang's and Si-woo's nasty attitudes. Soon-deok and Seon-ah are the only ones who seem to understand them.

"Moorim School" is a place that teaches intelligence and honor above the rigid academics focused on in Korean schooling. Dean Hwang, an overly zealous, careful man, is rigid in principle, but also deep with caring. His personality versus the zany personalities of his staff remind me of a group of teachers in a manga. The students as well. The four main characters have such disparate situations and plot threads that they don't quite fit together into a single plot. It is the manga-like detailed expositional dialogue that sticks it all together from Si-woo's sad story of his psychological hearing loss to Chi-ang's comedic take on his daddy issues, to Soon-deok's goofy ways of dealing with her poverty.

Despite the disjointed feeling of the plot, there are several parallels that are nicely done. Soon-deok is a goofball, but her ability to understand Si-woo's true issues and sympathize with him makes her compatable with his angst. Chi-ang and Si-woo compete for top dog, but instead are forced to accommodate with the school's core values that include learning to get along with people using honor and intelligence.

The venture in the mountain as a test of character was laughable in its outlandishness, but it did allow for some action scenes. They have been few and far between for a show about a martial arts school. And, it's always heartwarming to see two people open up towards each other in the face of adversity.

As for the acting, Lee Hyun-woo does a standout job, while Hong Bin shows serious improvement from his last roles. He has a natural gift for acting, but hasn't quite reached the stage of fluidity as Lee. He reacts well to more seasoned actors and I expect to see a change in fluency from now to the end of the drama's run. This is also one of the first shows in which the international cast is not incredibly awkward. Hooray! Onward to episode 4!