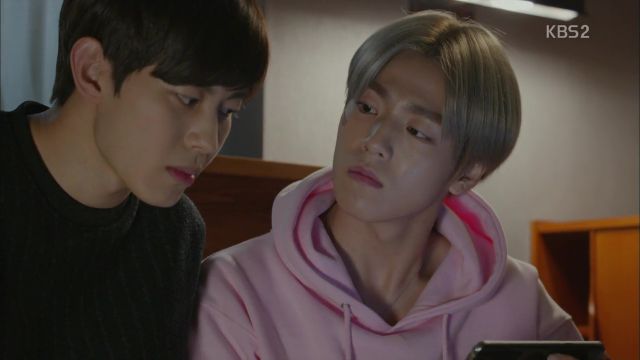 This episode was all about the building of friendship. Chi-ang and Si-woo look past their massive prides and see the good in each other. The kids at school learn via guilt that their treatment of the boys was cruel and uncalled for. And under all of that "Moorim School" continues to plod along pedantically.

The show spoon feeds emotions to its audience rather than create situations that can wrench them from viewers. Emotions and special moments are drawn out or repeated so often that they often lose their impact. The tightest relationship is that between Chi-ang and Si-woo because their fierce prides and sharp tongues keep the dialogue rolling and their bromance a-building. They cannot see what Dean Hwang plans for them: force them to face trials together, and they will come together as a result. It's an obvious ploy that strangely escapes the two very intelligent boys, and also the rest of the equally bright students. Again, this is much like a kitchy Taiwanese drama manga adaptation where plot lines tend to be overly simplistic and narratives require hoards of people to deliver them. The faculty and students are much like a Greek chorus, explaining happenings and feelings to keep the audience apprised of all the show's doings. It is a method that prevents serious emotional impact.

A good point of this episode was that we got to know Chi-ang and Si-woo the more they got to know each other and learn what friendship means. Their budding friendship made for some hilarious moments. Chi-ang literally "burns through" money, the cash in his wallet, to keep them warm in the forest. Their battles with wild dogs were fun, but could've resulted in fewer longing gazes and pensive moments. It's a method of filling up the time slot that is messy along with flashbacks. It's too early in the drama for so many flashbacks. We're only on episode 4!

There is a little romance budding and some antagonism in store. Chi-ang opening likes Soon-deok who is quietly nurturing a crush on Si-woo. It very obviously endangers the budding friendship between the young men. An obvious ploy, but it works because of the fine acting by Seo Yea-ji and Lee Hyun-woo. Not to mention that they have fantastic chemistry.

The antagonist kid at school is relegated to a scene or two and doesn't provide much tension. Neither does the storyline with Chi-ang's mother the mistress being hidden away like an embarrassingly gaudy trophy. they should either be dropped as points of tension, or more thoroughly developed.

We can do nothing more than wait for the next episode of "Moorim School" to see what will happen. The rather lackluster episode endings do little to ramp up anticipation. So, until we meet again for episode 5, adieu.