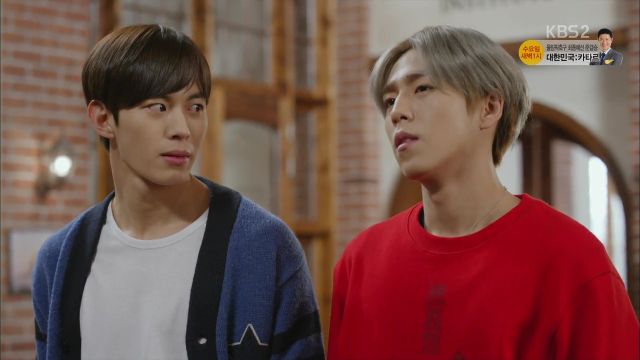 "Moorim School" should be cut down to forty-five minute episodes so that the filler material isn't so oppressive. The way the show struggles, the recent disputes between the producers, JS Pictures, and the broadcasting station, KBS, come as no surprise. There is so much recap material scattered throughout the episode that it drags and the ratings reflect that. But between the elongated brooding moments and the flashbacks there are a few tasty morsels to gnaw on.

The martial arts aspect of the school hasn't been played up, however this episode finally made use of it and it was extremely cool. If fight choreography like this could replace the excess brooding, the drama would be better for it - especially since Soon-deok's father seems opposed to the martial arts aspect of the school. Highlight that contention and go with it, show. I suppose this neglect goes hand-in-hand with the choppy of integration of the classes in the school with the overall concept of the show. The classes and teachers only appear when they are immediately relevant to the plot, which is an oversight. Had the classes and teachers been better established, their role in figuring out the complex psyche and past of Si-woo would feel much more natural.

The same holds true for Chi-ang's mysterious and sinister father. Lee Beom-soo didn't appear at all in this episode although he was mentioned several times. He has a vested interest in a man with a coma who is, as per Si-woo's nightmares, most probably Si-woo's father. This is a pretty important character involvement and to neglect screen time is an error.

It is nice to learn more about Si-woo. If his connection to the man in a coma holds true, he was a son in a family of four. His father was connected to the mysterious treasure, the "Chintamani", of the Moorim School that was mentioned several times over the course the sixty-five minutes of the episode.

After the trials of episodes 3 and 4, the students, save for the cantankerous Yeob-jeong, have accepted Chi-ang and Si-woo, which feels like the true kickoff of their adventures at the school. More than the budding friendships and camaraderie between the student body as a whole, the love triangle between Chi-ang, Si-woo, and Soon-deok comes into play. Although the boys are (or will be) battling for Soon-deok's affections, what is more interesting about this triangle is that Chi-ang and Si-woo are starving for friendship and they found that in each other. The contention over Soon-seok will rival that friendship, which has grown strong and sure in a short amount of time. Both boys have led very lonely lives and the Moorim School and its inhabitants are quickly changing it. But that growth doesn't come without growing pains.