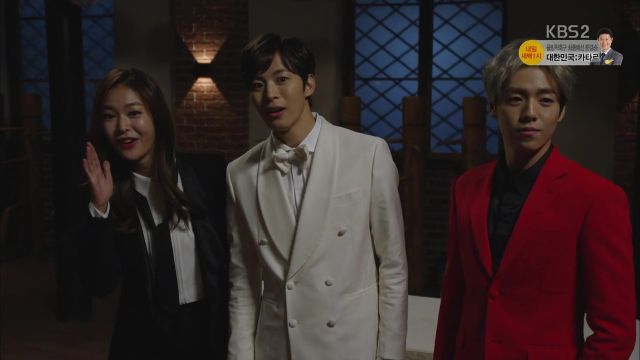 The manga-like storyline continues as each step of the plotline is detailed by teacher-fueled narrative. Romance buds and builds, pasts bubble up from pained psyches, and the students and teachers face a very, very strange exam season.

Let's begin by dissecting the midterm exams. They are, in a couple of words, utterly ridiculous save for one. There are martial arts exams, which make sense in a martial arts school. But then a potluck is held and the students are graded on their culinary skills, comportment, and ability to dance. These are remnant of an etiquette school regime. It's very out of place in this school. The teachers continue to fuss and argue, and the only one who isn't insufferable is Sam because he marches to the beat of his own drummer. Or perhaps because he is the only one not holding a battle of egos with his colleagues.

Aside from the strange school activities, the romance is developing quite healthily. Si-woo and Soon-deok are drawn to each other, sparking Chi-ang's jealousy. This episode sparked the first real interest between Chi-ang and Seon-ah, which is good because there is some serious evidence that Seon-an and Si-woo are related - the oppa adulation she's had can no longer be. Seon-ah may not be Dean Hwang's biological daughter and the fact that both she and Si-woo have nightmares about fires seem to strike realization into the minds of Hwang and the meditation teacher. Compounded with this is the return to consciousness of the mysterious coma patient. Ha-o, Chi-ang's father, is very interested in the man, most probably because he has something to do with the powerful "Chintamani" mentioned in the last episode. Ha-o is probably hankering for it for one nefarious reason or another.

As for the father and oh-so-handy biological family relations, my guess is that there was a fire, the coma man was knocked into an eighteen-year-long coma, his wife was killed, his son/Si-woo was left behind, and Dean Hwang brought the daughter/Seon-ah to the Moorim School (which we saw in the first scene of the first episode.) This mysterious fire is the most compelling conflict thus far. The show could've held onto the reveal of the blood relations a bit longer. Perhaps the shortening of the drama run from twenty to sixteen episodes had something to do with it.

In any case, the fighting is still really cool. I vote for more of that and less of the babbling teachers. I also vote for less Si-woo centric activity. Most of what Dean Hwang plans is to draw out memories from Si-woo and Seon-ah. He preaches that the school is there for all kids, but doesn't show that concern. I'd like to see more of the development of the other students and more of the teachers aside from their constant comments on the kids.

Here's to drama improvement. Bring it on, episode 7!