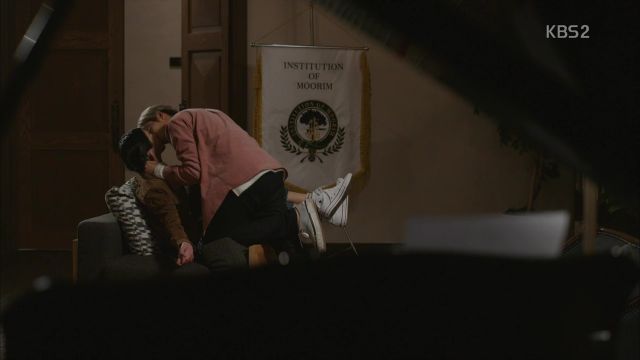 Episode 7 of "Moorim School" is the strongest episode by far. There was major character development and in the mystery that has only been hinted at before. A breath of fresh air has touched this drama and blown it away from the painful setup that characterized the first six episodes.

While the teachers and Yeop-jeong could use much more development, Chi-ang, Ha-o, and the mysterious coma man, Chae Yoon, saw some honest-to-goodness screentime. Chi-ang has flittered about Soon-deok, mooning over her and bromantically flirting with Si-woo. We knew he came from trying circumstances, but episode 7 revealed how he and his mother may have everything that money can buy save for love and acceptance from Ha-o - it has been exremely difficult for both mother and son. Ha-o is busy being mysterious and caring for Chae Yoon, the man who is most definitely Si-woo's and Seon-ah's biological father. Chae holds the secret to something that Ha-o covets. It will eventually pit Ha-o against Chi-ang, father against son, so it's good that Chi-ang showed more depth before something so heavy happens.

Chi-ang realizes that his love for Soon-deok is one-sided. She is smitten with Si-woo who only just realizes he feels the same way. Chi-ang now has to contend with "his" woman and his only male friend pairing up. Or at least that's what the particularly awesome couch kiss would imply. The kiss was filmed so well that it took me by surprise. In any case, Chi-ang is not to be left high and dry as Seon-ah keeps appearing to help him as his mentor and his confident, especially as time reveals that there is more to Chi-ang than his "spoiled illegitimate child" routine.

Yeop-jeong is a good character, he's just not causing enough tension. Dean Hwang scolds the kids for letting Yeop-jeong isolate himself, but we see no change in the kid himself. Alexander shows very little variation in facial expression - maybe he's trying and we don't know it. Instead of him, I'd like to see more of Sam Okyere who is delightful every time he's on screen. I could use more of him.

The mystery built up until now may include Dean Hwang, Seon-ah's adoptive father, and not in a good way. Ha-o and Chae Yoon wonder at his intentions. In all probability he's a good guy and the show is trying to throw us for a loop, but it's a good wrench to throw in the works. I'm actually keen to see tomorrow's episode and see how the love triangle works itself out amidst the burgeoning mystery around the school.