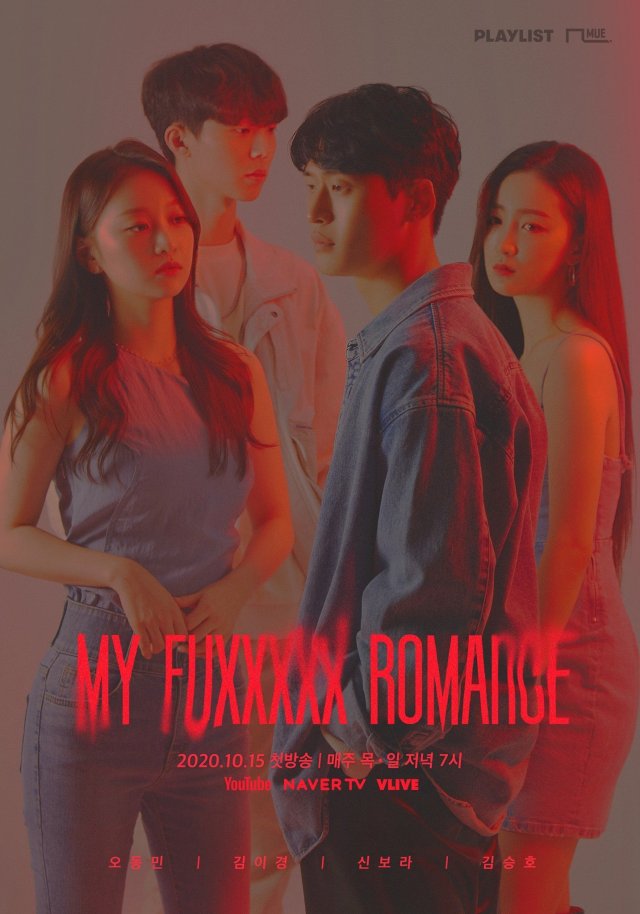 Hyeon (played by Kim Yi-kyung) first meets Jae-ha (played by Oh Dong-min) while on a blind date, although such a description is misleading. As Hyeon explains, the reasons she uses dating apps is not to find a romantic partner so much as it is to find a friend with benefits. The distinct impression is given that Hyeon could ditch the friends part if necessary, and is perfectly fine with just a single night of sex. But what if she wants something more?

That's the extremely predictable direction "My Fuxxxxx Romance" seems to be going, and I was pleasantly surprised to find that the production team had a more interesting concept in mind than just a rote romantic drama about selfish people learning to be less selfish. Well, all right, that's also a little misleading. All four of the lead characters in "My Fuxxxxx Romance" are undeniably selfish. The intriguing twist behind the drama is that they're selfish in very different ways.

Hyeon, to start out with, is the most transparent of the lot. She wants sex. Jae-ha's motivations are somewhat more complex. Jae-ha wants sex only in the context of his rules being respected. Jae-ha's rules are actually quite reasonable. He basically requires visitors to his home to behave like guests and not make too much of a mess. Yet in one surprisingly dramatic moment, Hyeon decides to pick a fight with Jae-ha over the rules, even though she's pretty clearly in the wrong.

Hyeon doesn't actually care about the specific rule she broke, to be completely clear. But the ensuing conflict really gets into how the arrangement between Hyeon and Jae-ha has become uncomfortably transactional. Hyeon and Jae-ha see each other less as people and more as objects. Their issues are quite a bit more deep-rooted than their immediate relationship with one another, and it's to the credit of "My Fuxxxxx Romance" as a whole that no serious attempt is made at resolving their issues.

Instead Hyeon and Jae-ha are contrasted against their foils. Ji-yeong (played by Shin Bo-ra-I) is Hyeon's best friend, to a borderline creepy extent as we see that Ji-yeong has a tracking device on Hyeon's phone. Of course, both Hyeon and Ji-yeong are prowlers, and it's reasonable for them to keep tabs on each other lest they go home with the wrong kind of man. Nevertheless, we're left wondering to what extent the relationship between the wingwomen is really all that healthy.

Then there's Min-hyeok (played by Kim Seung-ho-II) who's a friend of Jae-ha. He constantly pokes against the logic of these free sex arrangements, alternating between naive, obnoxious, and thoughtful as the story twists and turns. While many questions are begged about the nature of open relationships, the overall impression given is less that these relationships themselves are bad and more that our lead characters indulge in them as a way of evading the inherent toxicity of their own social outlook. The resulting story is dark, introspective, and fascinating- even if the ending was more optimistic than I would have liked.