[HanCinema's Drama Review] "My Love from the Star" Episode 15 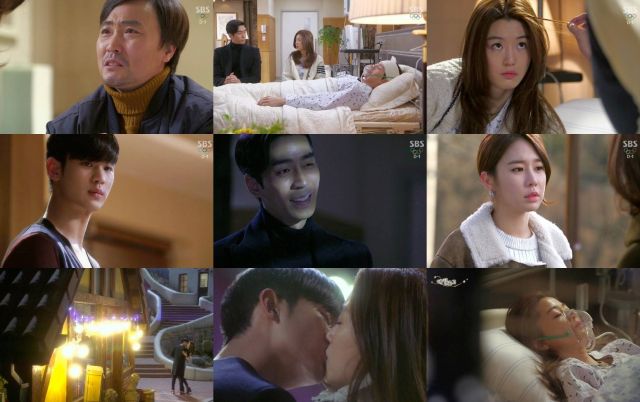 The drama has once again entered a cool-down period. The initial emphasis is on Song-I making a recovery. Also her daddy issues. Which honestly seemed rather light. Partly this may be bad timing. "The Prime Minister and I" just made a point in its final episodes that a long absentee parent is not necessarily welcomed back with open arms unconditionally. So it's rather odd seeing the usually acerbic Song-I just kind of...accept the fact that the first time she has seen her father in years was after a near death experience.

Hwi-kyeong's dilemma is a far more interesting one. The injuries he sustained last episode were significantly worse than Song-I's, yet the other characters only pay him token attention. Oh sure, he has visitors, and guards to his room, but that's no substitute to having people actually care about him. If Jae-kyoung had any emotional reaction to having nearly murdered his own brother, we certainly don't see much evidence of it in Shin Sung-rok's performance.

Park Hae-jin, by contrast, gives a convincing portrait of alarm even as he's strapped into a hospital bed. It seems increasingly clear to me that Hwi-kyeong is the real hero of this drama. There's nothing quite like a near death experience to make a person reevaluate what they think is important in life. Hwi-kyeong is just a better character for this kind of narrative development. He can't waste time when he doesn't have the ability to freeze it.

But never mind those storylines for now- the main hook in this drama is the romance between Min-joon and Song-I, and it proceeds at good pace here. In one memorable instance Min-joon uses his powers to undo a really dumb standard human mistake. Song-I's agitation is palpable and humorous- particularly the moment when she starts to get suspicious. Although I do wonder how Min-joon's powers are supposed to work in the context of cell phones.

Again, though, none of this actually matters. This drama has never been, nor should it be, a serious exploration of Min-joon's powers. They're just spectacle served to establish narrative points. And I have to admit that even if I personally have never found the romance that convincing, the final light show is a pretty fun one. "My Love from the Star" has a pretty good idea of how to cater to its fans and the narrative, while still far from perfect, is fitting into place well enough at this point that there's not too much to gripe about.

"My Love from the Star" is directed by Jang Tae-yoo, written by Park Ji-eun and features Jun Ji-hyun, Kim Soo-hyun, Park Hae-jin and Yoo In-na.

"[HanCinema's Drama Review] "My Love from the Star" Episode 15"
by HanCinema is licensed under a Creative Commons Attribution-Share Alike 3.0 Unported License.