The main focus this time is on Sang-hyo's love life, as every other plot point takes a backseat. For a drama that's mostly interesting from an intellectual perspective, this is not a good thing. I can understand why her relationship with Hae-yeong didn't work out, and how it was in a weird place, but that only makes the way everybody acts nostalgic about it here all the more perplexing. There wasn't really that much to be nostalgic about.

This might be a silly thing to admit, I know, but I was actually kind of hoping this drama would show us more of the ins and outs of actual wedding planning. There's been lots of murderous scheming and screwball chases over alleged romantic liasons, even plenty of discussion about the way hotels can be affected by bad public relations. And yet there's almost no explanation of what Sang-hyo's job actually is. The weddings just seem to happen practically spontaneously. 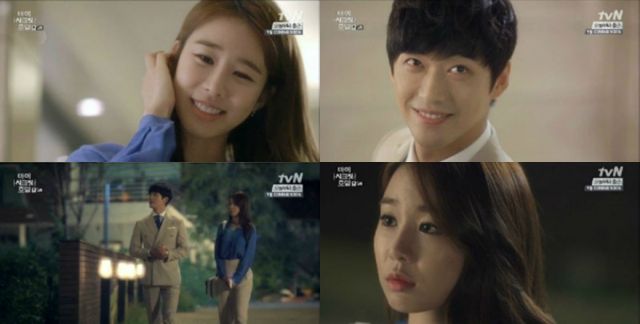 Even taken on its own merits without expectations, the love story with Seong-gyeom isn't really that inspiring either. I get the sense that this guy likes screwing with people, and that's why he never demonstrates any kind of emotion. It's much easier to trust a person who gives no clear outward sign of being sneaky, even if that's the only reasonable way to interpret his actual actions.

For the moment that makes Seong-gyeom the strongest long-term prospect for the murderer, but this is mainly because, as usual, the other characters aren't really doing that much except be a vehicle for the occasional joke. And they're really not good jokes either. I'm not all that comfortable with male gaze being shoved unceremoniously in my face as if women dressing sexily is supposed to be an inherently funny concept. Those kinds of gags only work when there's a satirical element involved.

It's easy to get critical on these little points when so much of the actual writing here is hung up on minor clues, which are never anywhere near as interesting as trying to read the actors' expressive reactions. This is the main thing that distinguishes visual mysteries from written ones- the fact that we can actually see what's happening. Hopefully at least the actors have full access to the solution, because if not I could easily see "My Secret Hotel" devolving into a frustrating waste of time. Even if this episode wasn't that bad, it could definitely signify a long-term downward shift in quality.