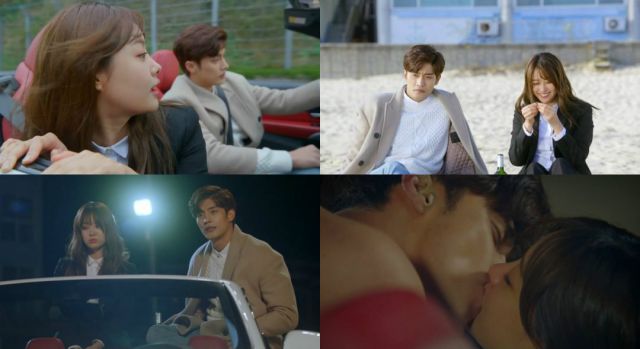 Jin-wook (played by Sung Hoon) is a playboy and a bit of a jerk. The first we see of the guy, he takes over a party and then walks back his sexiness with a rather ridiculous sounding excuse. As mean and selfish as Jin-wook seems at first glance, we do find out by the end that the excuse is actually evidence of Jin-wook's secret good side. Which is fortunate, since up until that point, we frequently see Jin-wook get in trouble for stuff that's not actually his fault, yet never does he seem all that sympathetic.

Meanwhile, Yoo-mi (played by Song Ji-eun) is the kind of person who comes to a nightclub dressed like an accountant and makes a fool of herself whenever she lets go of her inhibitions. The rest of the time, Yoo-mi is exceptionally clumsy. We see little evidence of Yoo-mi being a particularly good person, although we do at least feel sorry for her. Yoo-mi's mother Mi-hee (played by Nam Gi-ae) is...a piece of work, I'll tell you that much.

More than any of the characters, though, the real person of interest in "My Secret Romance" is director Kang Cheol-woo. He made "Something About 1% - 2016" last year a drama which, much like "My Secret Romance", was incredibly archetypal. "Something About 1% - 2016" also had a rich jerk and an antisocial (if disproportionately cute) nerd. The one night stand element is reminiscent of "Fated to Love You", and even the secret corporate heir trope is reminiscent of...lots of dramas really.

So what does Kang Cheol-woo add that's different? Well, mostly he focuses a lot on scenes that don't involve dialogue. Musical montages, complicated camerawork, and disproportionate emphasis on awkward moments all work to make "My Secret Romance" seem, on the superficial level anyway, to be quite stylish. This helps "My Secret Romance" feel more like a movie than a drama with its particular emphasis on physical, rather than emotional humor.

But for all that "My Secret Romance" is nonetheless still a very obviously classically clichéd South Korean romantic comedy drama. The main accomplishment so far is that I can at least understand why it's on OCN- "My Secret Romance" is clearly making an effort to be a cool, hip romantic comedy for young people. Whether it's actually succeeding is a bit more difficult to say. At minimum I'm not being actively annoyed, and I am at least mildly curious as to what's going to happen next.