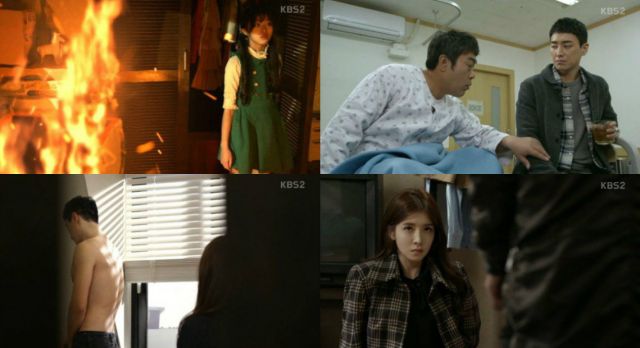 Jin-ah (played by Jung In-sun) is an artist undergoing therapy for a traumatic arson case some ten years ago. Through this process, Jin-ah has been able to unearth memories of a distinctive wound on the body of the presumed perpetrator, who she saw before and after the crime had been committed. Meanwhile, Cheol-soo (played by Lee Joon-hyuk) is a goofy fireman with a disfigurement identical to the one Jin-ah remembers. But for the most part he lives in a happy-go-lucky comic world filled with locker room banter and generally annoying people who don't like to be rescued.

This bizarre contrast is the big tonal mystery in "Naked Fireman". Honestly I'm surprised the production team is able to juggle the task so well. One minute Jin-ah is agonizing over the arson case and the next Cheol-soo is acting like the lead in a low-brow comedy centering around the lives of firefighters. Both interpretations are so on the nose it's legitimately unclear what kind of drama "Naked Fireman" will be going forward.

In context anyway. If you watch the preview it's pretty obvious what's going to happen next. But ah, that immediate tension! That perfect cliffhanger! Using alternate perspectives to establish genre shifts within the same story is a very clever and effective way to reframe a basic mystery plot into something much grander. The shift also works to make pretty much every character a plausible suspect in the arson, which is great. I already really want to know who did it.

Pay special attention to those scenes halfway between tones. In order for Jin-ah and Cheol-soo to inevitably meet, they have to work through various intermediaries who traverse both genres. They accept the premise that Cheol-soo might be an arsonist while simultaneously maintaining a jovial demeanor with him. This is a little messed up, and begs the question as to what degree Cheol-soo appearing as Jin-ah's model was really a coincidence.

Even throwaway jokes work as surprisingly subtle clues. Pay attention to the comments made during Cheol-soo's many shirtless scenes, which show how somehow, someway, with all sorts of alternatives available, the action always manages to center around Cheol-soo with no apparent effort on Cheol-soo's part. Could this just be contrived scriptwriting? Inconceivable- what writer would be stupid enough to call attention to her own inconsistencies like that? No, I suspect Yoo Jeong-hee has something much more clever in store for us.