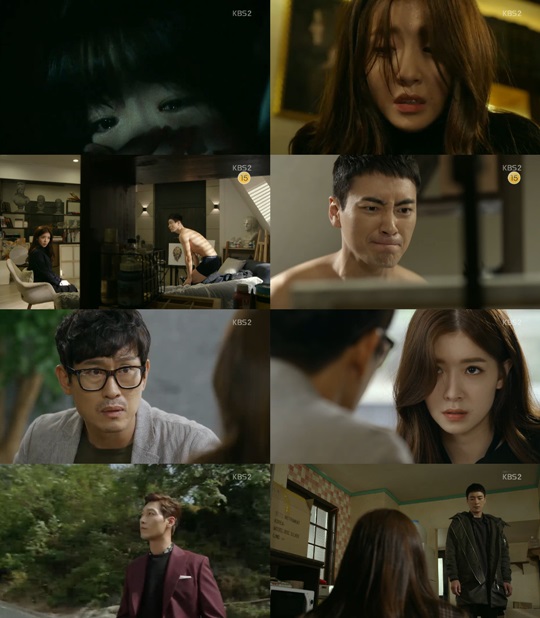 With more flashbacks of the mysterious arson incident it soon becomes clear that yes, Cheol-soo is indeed the man (or at the time, idiot teenager) who Jin-ah briefly brushed paths with on that horrible day. But as usual, Cheol-soo's relatively demure behavior in the modern day complicates Jin-ah's narrative of his villainy. Cheol-soo is still stuck in his adorable little romantic comedy world, performing only noble chivalric deeds when in the presence of a lady.

There's still pretty strong tension when the action takes place from Jin-ah's perspective, though, which is why the gradual softening works mainly to explore her character development. Jin-ah is frightened, not just of Cheol-soo as a criminal, but also Cheol-soo as a man. Given the disreputable quality of man Jin-ah is personally familiar with, this is not surprising. The only apparent exception is detective Jeong-nam (played by Jo Hee-bong), who maintains an aloof interest in Jin-ah's case.

Elsewhere Seong-jin (played by Park Hoon) is Cheol-soo's best friend and obvious grifter. Yet even our perception of him is skewed, as Seong-jin's scenes with girlfriend Song-ja (played by Seo Jung-yeon) play out like a farcical heist movie. Perspective really does matter for a lot in "Naked Fireman", as it's only very rarely we get a good glimpse of a character beyond their own generally positive perception of self.

The tone variation is also excellent in how director Park Jin-seok is able to masterfully pull off scene transitions without anything feeling off. The big late twist is just barely foreshadowed a moment earlier with an ominous shot of a character in the foreground while the other is on the phone. In "Naked Fireman", every little character interaction is just tallied up as evidence to some sort of grand larger purpose, even when on superficial glance these moments may just come off as overdone clichés.

As usual, it helps that said clichés are exceptionally well-done, and the characters are straight-faced through every moment of the interaction. There's so much going on in "Naked Fireman" that the details are easy to miss, yet obvious in retrospect, which really works to heighten the power of the mystery even as new clues pop up at a decent pace. Oh, but one word of warning- much like last episode's preview, this one spoils a lot of what's about to come. In order to maintain the proper sense of suspense, I strongly recommend that you do not watch it.