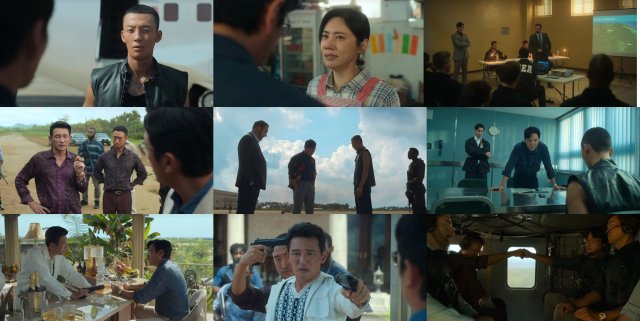 In its second week of availability, "Narco-Saints" had a much stronger run than was implied with the first week. With 62.65 million hours viewed from September 12th to September 18th on the official Netflix charts, "Narco-Saints" was the most popular non-English show on the streaming platform as well as the second most popular overall. While interest has died down since then, "Narco-Saints" is nevertheless a strong success for Netflix.

I still didn't much care for it, though, and the oddly anticlimactic final episode is a continuation of many of the problems I've seen with the drama. Pastor Jeon is still treated as a serious, menacing threat right until the very when he's just...not. His cult collapses with the DEA raid. He seems to escape the compound mostly through dumb luck, and also to allow In-goo the chance to heroically do battle with him in hand-to-hand combat.

What kind of arc did In-goo himself get? Not much of one as far as I can tell. After his knowledge of cars helps to impede Pastor Jeon's escape, In-goo decides to go back to South Korea and try his hand at the automotive business again. I guess he doesn't care as much about money anymore. In-goo's obsession with money was never really that well connected with objective reality but even so, the way he just kind of forgets about his stated motivation to date was rather oddly flippant.

There's no real curveballs here, unless you count the generally pointless twist regarding the baseball Pastor Jeon gave to In-goo. The indirect comment on Pastor Jeon's part about the baseball being the only genuine thing about him doesn't even mesh that well with Pastor Jeon as a character. Pastor Jeon never really saw himself as a fraud or an imitation as far as I could tell. He really was a dangerous drug lord, and demonstrated no inferiority complex about his own capability, just paranoia about whether other people were trying to scam him.

Ultimately the big problem with "Narco-Saints" is that the project is hollow. There's not really anything to differentiate it from the countless other non-Korean drug shows on streaming these days. The period piece angle of our characters being Koreans of ten years past was almost entirely underdeveloped throughout, with only the occasional reference to a baseball player or cell phone providing the show with any sort of temporal grounding. "Narco-Saints" is watchable, but not impressive.