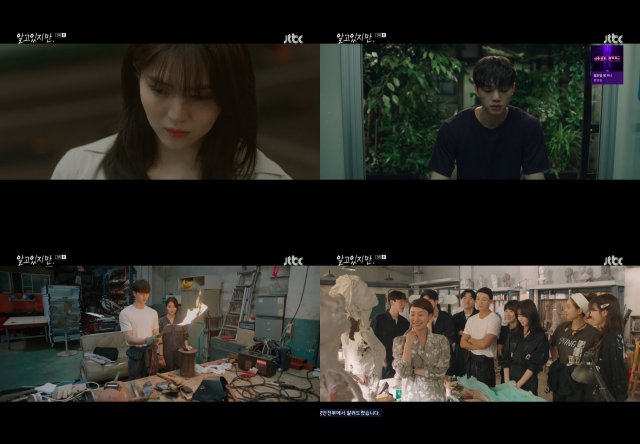 Last episode Na-bi had finally tepidly been willing to confront Jae-eon over his seeming lack of fidelity. Immediately afterward, they are confronted by a man who's furious about the way his younger sister was hurt by Jae-eon. The specific details are left vague, but the substance of the encounter gives Na-bi the push necessary to admit that Jae-eon's lack of honesty, and more importantly his apparent inability to believe this dishonesty is a problem, are too alarming to ignore.

"Nevertheless" the two still miss each other, and a few brief scenes from Jae-eon's perspective appear to suggest his feelings are sincere. We also get the impression that Jae-eon has the same ambivalent understanding about social situations that Na-bi does. But for the most part there's not much rumormongering this episode. As it happens, by not sneaking around all the time, Na-bi and Jae-eon give other people very little to gossip about.

Consequently we see Na-bi's personal and professional life enter a period of noteworthy stability where she can actually focus on her work. Or maybe it merely seems that way, since her curt and brief interactions with Jae-eon just seem to confirm that breaking the relationship off was the right decision. True to form, though, Jae-eon finds a way to get back in Na-bi's good graces through well-meaning manipulative behavior.

Elsewhere Bit-na (played by Yang Hye-ji) does lots of neat stuff with her hair, and is increasingly irrationally jealous that Gyoo-hyeon (played by Kim Min-gwi) is dating another woman, using an incomprehensible in-joke about mint chocolate ice cream as an excuse. Despite Bit-na publicly blowing up in public on the subject, her dynamic with Gyoo-hyeon doesn't inspire much gossip. Mainly this is just because they don't act like it's a big secret. They're still widely understood to be close friends whose relationship isn't considered a secret.

Bit-na is also clearly used to being able to confide in Gyoo-hyeon, to the point not being able to do so greatly frustrates her. Despite Bit-na being described in the cast list as Na-bi's best friend, they clearly don't have a relationship anywhere near this close. Nabi's just too isolated emotionally, on speaking terms with everyone, and being the kind of person they'll stick up for, but not someone anyone's that close to. This doesn't quite make Na-bi vulnerable to Jae-eon, though, as we start to see Na-bi developing serious resistance to Jae-eon's charms.