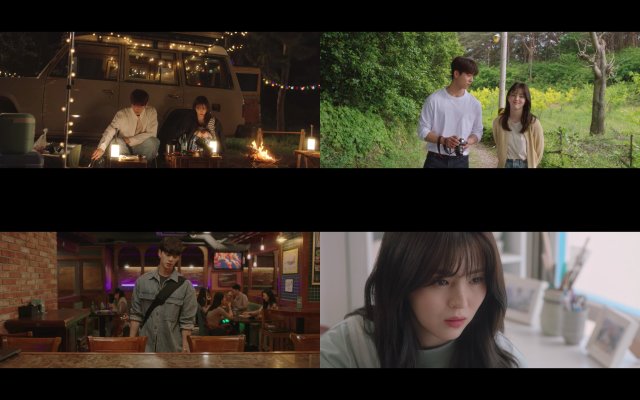 Na-bi and Jae-eon do not interact for this entire episode. Jae-eon does attempt to contact her a few times, but by and large Na-bi just relaxes back at home and mostly successfully tries to avoid thinking about Jae-eon. There's plenty of cuteness involved with Do-hyeok, as the two have pleasant excursions. But the most interesting character ends up being Na-bi's aunt Jeong-sook (played by Yoon Sa-bong).

In her brief appearance Jeong-sook offers some explanation on Na-bi's home life. We've seen already that Na-bi's mother isn't exactly all that attentive as a mother. But Jeong-sook has a more forgiving perspective of her sister's behavior. As Jeong-sook puts it, to Na-bi's mother, love isn't about finding the person who's nicest to you, but rather the one who's most special to you. And it was only through this life philosophy that she was able to give birth to Na-bi.

The sentiment is sweet, yet takes on some unfortunate subtext. Namely, that being treated nice and being treated special are presented as mutually exclusive binaries. Yet this underlying attitude explains a lot of the tension in Na-bi's perspective to relationships. Na-bi likes that Jae-eon makes her feel special. Yet nothing in Jae-eon's manner suggests that he's a particularly good person, or that he cares about Na-bi's own desires except to the extent they intersect with his own.

There's a deliberate detachment from viewing relationships as a social contract here. And while the reason we've been given for this detachment is to decrease drama, practically speaking it never works like that. Observe how Bit-na and Gyoo-hyeon are now doing the secret relationship thing too. But mainly to Gyoo-hyeon's irritation. He wants to be proud of being with Bit-na. And he naturally sees Bit-na reluctance to go public on the subject as a bit of an insult. It seems to him they're just friends who have sex rather than a couple.

The distinction is subtle yet meaningful, and a lot of "Nevertheless" is just exploring the extent to which it matters. Do-hyeok, with his more traditional arc of having to work up the courage to admit his feelings to Na-bi, inevitably comes off as significantly less cool than Jae-eon. But unlike Jae-eon, we can clearly see that Do-hyeok really cares about Na-bi and takes her feelings into account with his actions. This is far more special treatment than Na-bi has received from any other man in her life, even if that's not how it feels.