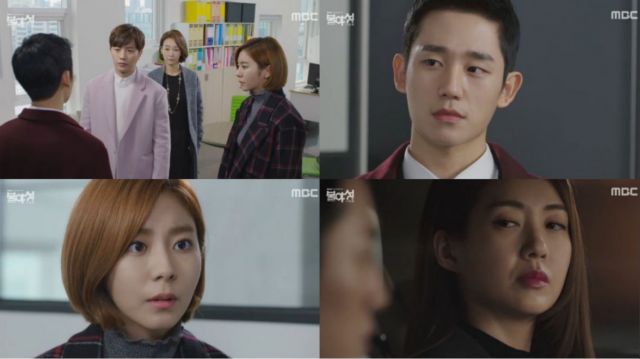 I realized, near the end of this episode, that part of the reason why "Night Light" is so boring is that the production team is very bad at figuring out terms of scale. When the early episodes play with Russian Roulette and violent hostage situations, the tension is real and powerful. People get mad and offended for good reason. Whereas here...a simple police investigation is treated like some sort of huge betrayal, when there's little indication of meaningful long term consequences.

Even possible emotional hooks fall flat simply because they're totally underdeveloped. Consider how little tension there is as to whose side Tak is really on. Part of this is because we already pretty much know from the beginning what's going to happen. But what does Tak think about this? Why is I-kyeong so confident he'll follow through, given that Tak was already frustrated with her enough once to actually quit for awhile? Especially when Se-jin was the main reason he came back?

Given how impersonal the drama is most of the time, Se-jin's climactic moment of being offended really does come out of nowhere. Gun-woo himself bears the brunt of the inevitable counterattack, and even he doesn't seem all that bothered anymore. So why is Se-jin letting herself get so badly distracted by I-kyeong's world? What exactly does Se-jin want anyway? What grand cause does she think is being waged here, that can only be solved with I-kyeong's redemption?

As usual, there's the missing emotional narrative core of "Night Light". I'm resigned at this point to the conflict, whatever it is, being solved arbitrarily by a lucky punch that I-kyeong fails to notice when she's very good at predicting every predictable move her enemies throw at her. I-kyeong doesn't even know where the goon squad came from, for example, but all the same, she has a ready counter-attack which insures that no late business appointments are kept.

Because that would be bad business you see. "Night Light" is set in this incredibly mundane business world where everyone is always acting like they're on the point of crisis. I-kyeong wins time and again because she's the only character who correctly realizes that a calm, focused mind looking to the long term can easily outsmart the greedy people in her field. Se-jin is no less greedy than the other executives, really, simply because her goal is about as short-sighted and ill-defined.