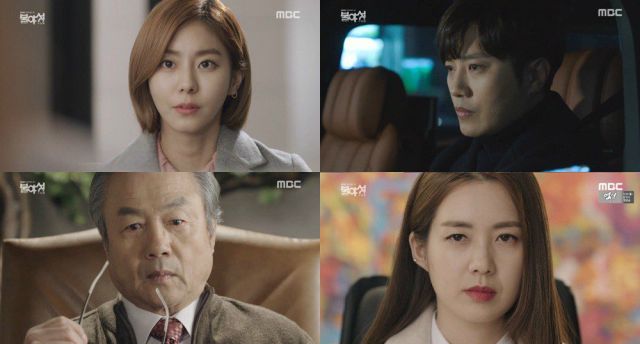 With I-kyeong having thoroughly humiliated the previous villain into complete irrelevance, it's difficult to take the few remaining bad guys in "Night Light" all that seriously. Even all the rumblings about a possible spy are largely undercut by the fact that I-kyeong herself barely seems to care about the potential danger, and the problem goes away just as soon as she decides to put some actual effort into solving it. Se-jin, meanwhile, has learned to just accept that this is who I-kyeong is.

While that's not the most exciting character arc, I can appreciate the sentiment behind it. I-kyeong and Se-jin are really nice as a couple because theyir wildly different personalities underscore how when Se-jin worries about I-kyeong, it's because she's being sincere. It's also worthwhile, at points, to ponder why Se-jin is so much better at getting through to I-kyeong than Gun-woo is, when Gun-woo has an actual history with the high-powered executive.

The unsympathetic reading would be because Gun-woo is a boring character. But I'll be charitable for once and instead attribute it to the power of I-kyeong and Se-jin's feminine friendship, which possesses an intimate sympathy largely unheard of in the world of ruthless backstabbing men. Even if I-kyeong never shows emotion, she does clearly understand it. That's her main strength, and why all the men, even Gun-woo, so frequently come off as mere buffoons.

Even weirder, the presentation kind of makes it look like we're supposed to feel sorry for the villains here, which is hard to process considering how one-dimensional they've all been up until now. That's kind of an accomplishment, really. How exactly can a full nineteen hours of screentime be so completely incapable of giving us a clue as to who these people are and what they want? I-kyeong at least had an excuse, since being enigmatic was her whole charm. No one else has that.

"Night Light" possesses the dubious honor of being a drama where the main bright spot is the strong chemistry between the female leads. In a lesbian romance this would probably be enough to at least nudge the drama to above average, but in a...business negotiation re-enactment? What kind of genre is "Night Light" even supposed to be anyway? The cliffhanger kind of makes it sound like it was about I-kyeong and Se-jin running off to have wacky heroic adventures together, but it definitely wasn't that. Which is a shame, because I probably would have liked that drama.