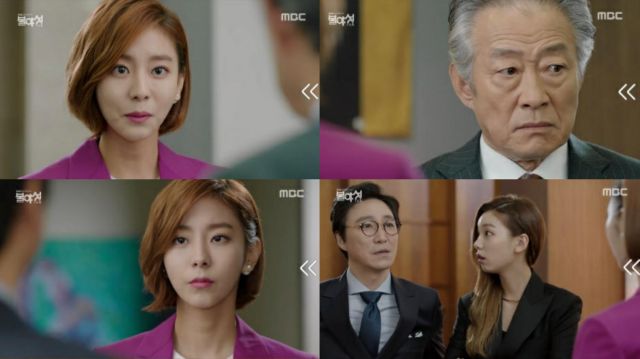 After a fairly dramatic cliffhanger "Night Light" fails to deliver on much of that promise this episode. The general personalities of its characters do not gain any new dimensions here. Even the big central scheme ends up being fairly lackluster, since all it really amounts to is Se-jin acting cool and confident thanks to the afterglow from I-kyeong's aura. While that's all well and good, Se-jin was able to do plenty of that before she ever even met I-kyeong.

Setpieces and character interplay are, unfortunately, all "Night Light" really has to go on so an episode like this can kill momentum all too easily simply by centering too much around boring, technical conversations that only really make sense in terms of business logic. English-language business logic is arcane enough on its own. It's just too much of a struggle to make sense of the tiny Korean business nuances that I-kyeong is exploiting, especially when so much of the plan revolves around her enemies (and by extension the viewer) not having any idea what she's doing.

Watching Gun-woo run around after I-kyeong is a lot more relatable, and brings up more interesting metaphors. Consider how I-kyeong doesn't need a prince to rescue her. That's good- I-kyeong is tough enough to handle herself just about anywhere. We know that. But it's pretty depressing to note that I-kyeong also doesn't need friends. This begs all sorts of questions of what exactly she's even fighting for. I-kyeong is so unfeeling it's hard to see her getting much out of revenge.

When the antagonists are such genuinely miserable people on their own without the need for I-kyeong's interference, it's hard to understand why she puts so much effort into fighting them. In all fairness that is the central mystery of I-kyeong's psyche that makes her interesting. Gun-woo finds I-kyeong's coldness genuinely frustrating. Meanwhile, Se-jin finds that simply not caring about anything is a surprisingly effective tactic for getting tasks done.

But what tasks, and why? "Night Light" can't continue to dance around these questions forever. The weaknesses in the plotting of the script only become that much more glaringly obvious when I-kyeong is not talking to her foils. Style can only go so far without decent plot progression. I've already decided I like I-kyeong. Without more interesting goals or motives, though, I-kyeong only has so many tricks. Without more variation, in the end she'll be just as boring as the main plot.