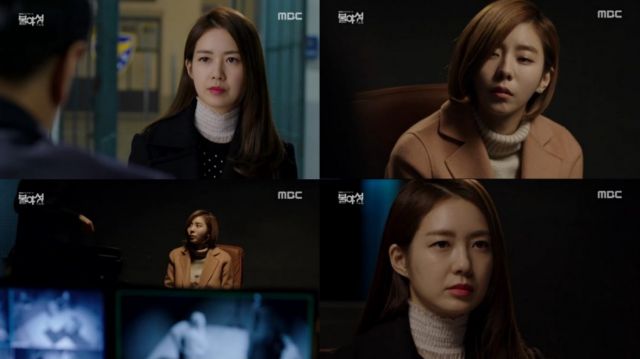 At the end of this episode I had an annoying moment of realization. Technically the story hasn't actually started yet. We're still in the set-up. I-kyeong is still "training" Se-jin who, true to form, is slow to adjust when past actions catch up to her and the younger woman is completely unsure as to the extent she can or should lie. Nothing turns out too badly but ultimately all we've learned is another important aspect of the backdrop- the rules can change, if temporarily, provided enough money changes hands.

This will likely be relevant in long perspective. As has been demonstrated in the past, I-kyeong and her enemies all play by the same set of dirty tricks. So whether I-kyeong's motive here is business, pleasure, or vengeance, her plan can't ultimately rely on the intervention of outside forces who are susceptible to bribery. That explains, to some extent, why I-kyeong is so nonplussed by Gun-woo's obvious disapproval. Where I-kyeong's going, she won't need men like Gun-woo.

But where is I-kyeong going anyway? I'm still really not sure. Considering the extent to which I-kyeong has been training Se-jin, the younger woman must serve some incredibly important place in the plan that I-kyeong can't do herself. The implication I've been getting lately is that I-kyeong's plan can't even really start until Se-jin is ready. This is why so many of the scenes in "Night Light" are just characters tossing up exposition or getting past minor obstacles. These minor fluctuations, in their own way, demonstrate the weaknesses I-kyeong will eventually exploit.

I get that. To some extent, I even like that, because generally speaking exposition is good. Lately, though, I really just don't see what the point is to all this exposition. The most explosive setpieces, or for that matter the most memorable villains, are not the big corporate types but the lower-level thugs whose violent actions force confrontation. It's gratifying to see beatdowns with clear winners and losers.

And that's not something we've seen for quite some time now. There's just these endlessly repetitive conversations that never go anywhere because there aren't any stakes. While I get that this boring stuff is very important behind the scenes of real dealmaking, the whole point of narrative drama is that it cuts out those parts or minimizes them so we can get more of the good stuff. Let's have less talking about plans and more actual execution of them.