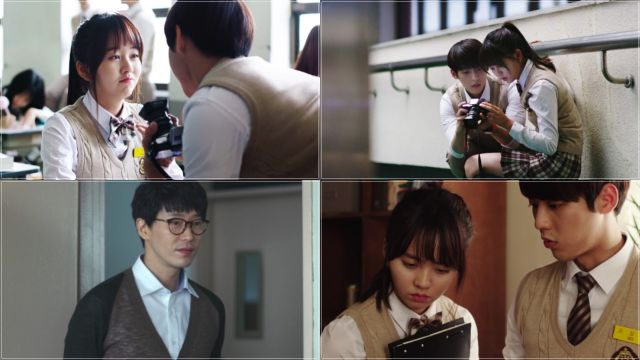 Ye-rim (played by Kim So-hyun) and Sang-woo (played by Lee Minhyuk) are a couple of high school students who get on each other's nerves in a way that obviously shows they like each other, even if they won't admit it. But that's not the kind of drama "Nightmare Teacher" is. Ye-rim and Sang-woo are just observers in an anthology story, one where Bang-goo (played by Uhm Ki-joon) engimatically offers students the means to achieve their dreams. Or does he?

In a pattern that appears to be a sticking point for "Nightmare Teacher", the first fifteen episode develops the characters and the problem, where as the second fifteen minute episode shows the student actually try to use Bang-goo's artifact with predictably ambiguous results. Eventually left in a situation where retreat is impossible, the student is left to a suitably ominous fate, trapped and twisted as their own initially well-meaning designs take on a turn for the morbid.

Not that morbid, fortunately. Which is funny, because both of the initial stories deal with bullying. First the emotional kind, then the type that's based on physical intimidation. "Nightmare Teacher" doesn't gloss over the general misery involved in being the victim of bullying, yet at the same time we see the victims transform from being positive, sympathetic people to the exact same kind of generally cruel person who provoked their desire to ask for Bang-goo's help in the first place.

As storytelling goes so far "Nightmare Teacher" seems satisfied just making a note of how we ought to be careful what we wish for. In that respect the drama certainly has its moments. To date my personal favorite has been the sense of escalation in the fourth episode. It's kind of like watching someone try to win a video game with an underpowered character and having to resort to cheating with increasingly cheap tricks in order to do so. I've tried to do that in the past. It's a bad habit, and "Nightmare Teacher" offers a good reason why that's a bad idea.

Beyond that I'm mostly left wondering as to what the overarching theme is going to be. While the anthology element is interesting enough on its own, Ye-rim and Sang-woo's constant flitting presence in the story, coupled with their observation that two seats are empty at the end of the fourth episode, seems to indicate they're going to have some sort of confrontation with Bang-goo. I can only hope that, in the best anthology tradition, they're going to beat him at his own game.