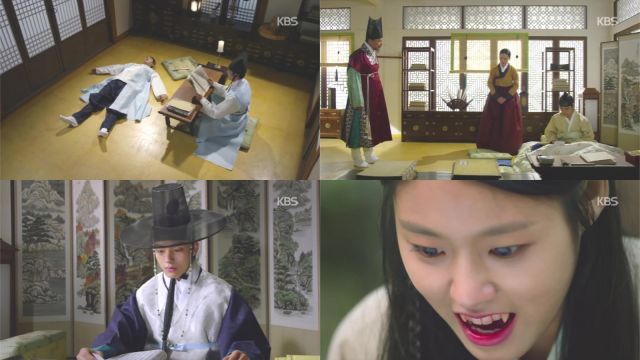 This episode is less a continuation of the "Orange Marmalade" storyline as it is a completely new story with the same characters and concepts transported to the Joseon era. Like the title says right at the beginning- this is Season 2 Episode 1. Surprisingly the backdrop isn't quite as medieval as might be expected. Sure, the opening violent setpiece brings to mind a time period when normal people had way, way less patience for vampires. But beyond that, most of the vampires are relatively friendly.

What's especially amusing is that, even with technological standards much lower than the present day, the vampires have still figured out a decent black market system that lets them masquerade as humans. In modern times it's easy to see why vampires would want normal creature comforts. But in the Joseon era? Back when the best thing you could do for fun was just hang around with your buddies and try to avoid getting into a huge fight? Or practice martial combat? Or play the flute in a beautiful sunlit meadow?

Well, hm, put that way human life doesn't actually sound that bad. Even with all the obvious drawbacks. And yet "Orange Marmalade" continues to remind us that the Joseon world too was a grim place, even without vampiric influence. Simply stumbling through the forest is enough to invoke life-threatening danger. This is very much a world where clumsiness is not at all forgiven, and blatant cronyism is at times necessary to mark out survival.

On the surface this all seems completely radically different from the high school romance setting we've seen up until now. Jae-min and Ma-ri are no longer students who are supposed to be learning. They're full-fledged adults who at any given moment are likely to be thrust into a situation that will completely change their outlook on life. The love story takes on a much greater sense of urgency here- nobody's going to be tiptoing around with high school courtship. If Jae-min had his way he'd be married to Ma-ri by the end of the week. Yet in spite of all this the characters and situations feel mostly the same.

The funny part about the genre fusion here is that the vampire part of the story seems a lot less important than the analysis about how different and yet similar life was back then for high school kids. Ma-ri's true form is just dramatic flavoring that, coupled with the cliffhanger, seems destined to have the second season also end poorly. Until then, there's little left for the viewer to do except gape at the equally melodic yet unlike atmosphere of the new "Orange Marmalade" story arc.