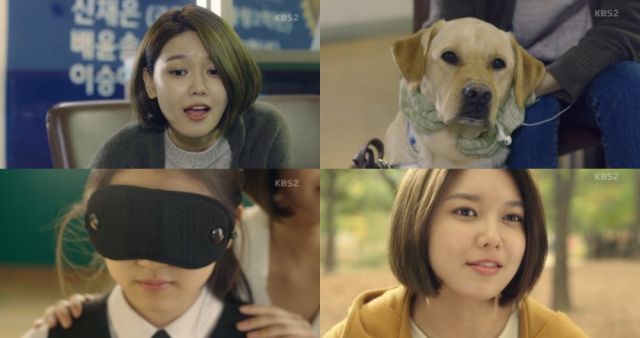 Ah-yeon (played by Choi Soo-young) is a blind English teacher. "Perfect Sense" is mostly dedicated to demonstrating how this condition, being blind, is not as big a deal as it may seem. Consider the opening scene at the ice skating rink. Ah-yeon skates better than I can, no doubt about that, because there is more to proper navigation than just what you can see. So it is with life- the most important parts of the world have to be understood through more than just the eyes alone. Even if Ah-yeon needs an adorable service dog to help out.

Technically, though, "Perfect Sense" is not really Ah-yeon's story. Rather, she simply becomes the guiding mentor-like influence to high school student Eun-seo (played by Jung Chan-bi), a girl who recently lost her father, a renowned blind ceramicist. This sense of grief is compounded by the loss of her father's service dog, who was a loyal member of the family. Factors like this serve to make Eun-seo feel like her entire world is falling apart.

"Perfect Sense" is an argument that this kind of thinking is complete nonsense. Ah-yeon's entire existence is used as simple proof that a woman can be attractive, happy, and successful while still being blind. Ah-yeon's first official meeting with Eun-seo, for example, appears specifically designed to demonstrate that Ah-yeon could have a boyfriend, if she wanted one, but she does not. The blind need not be desperate. So it follows that Eun-seo has been fixating too much on her father's disbaility without appreciating so much what went in to his happiness.

The tone is soft and reassuring. While the script flirts with darker ideas like bullying ultimately the main crises are in the imagination. Characters worry about disasters that never come to pass because other people (or dogs) are around to act as a sort of safety valve. Even the prospect of permanent separation is treated as not such a bad thing because we always have memories of loved ones.

It's just, don't dwell on those too much. "Perfect Sense" makes specific note of the idea that loved ones, be they parents or service dogs, have to expect that we'll move on from them at some point because people tend to outlive their parents and pets. Life, in this formulation, is about appreciating everything we have while we have it and not getting hung up on a past which, while enjoyable, was still in the past. It's a sweet sentiment that makes "Perfect Sense" enjoyable to watch.