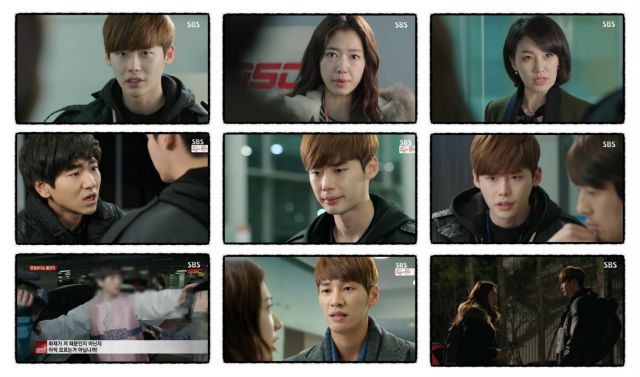 This episode takes the form of a mostly dry investigative procedural, as the characters take different approaches to uncover the inaccuracies in Cha-ok's reporting. By the end we've mostly arrived in a pretty neat place- the inconsistency has been uncovered. While in the short term this most likely exonerates Chan-soo, more open questions like what actually caused the fire in the first place remain open, and will probably be pursued later on.

It's pretty much the bare minimum necessary to keep the main storyline moving, complete with an unfortunate incident detailing how much Chan-soo stands to lose if the media circus continues. Mostly, though, this episode is about In-ha, who appears to have developed an alarming case of stigmata. More worrying is the fact that she apparently genuinely believes this isn't a serious problem that warrants impeding the investigation, or even seeing a doctor.

The purpose of all this in the context of the narrative is to provide fodder for the romantic storyline. While I could appreciate this effort, after last episode's huge revelations regarding So-ra I was expecting more of a follow-up on that. It does help, to some extent, that Dal-po only directly goes after In-ha on this front once the big breakthrough has been made in Chan-soo's case. Still, the paternalistic implication that Dal-po should have been minding In-ha even though they work for competing news organizations and don't even live together any more is somewhat troubling.

Not being the mood for romance is a matter of personal taste on my part. Even ignoring that there's still other generally annoying inconsistencies here. Why does Dal-po have free reign to the workplace of his competitor? You need badges to get inside press buildings. For that matter, why are In-ha and Beom-jo being allowed to work at cross purposes to their own editorial line? And how does Yoo-rae keep getting into the senior reporter communal area?

While the episode wasn't too my general liking there are at least some interesting bits here. The Dal-po or Ha-myeong identity conflict is deliberately defined here- he's Dal-po when dealing with In-ha, and Ha-myeong when dealing with his work as an investigative reporter. Given the predominance of the romantic storyline, Dal-po is probably the best name to use for the foreseeable future- even if characters themselves have to remind themselves to stop calling them that. Personally though, right now I'd really rather see more of Ha-myeong.