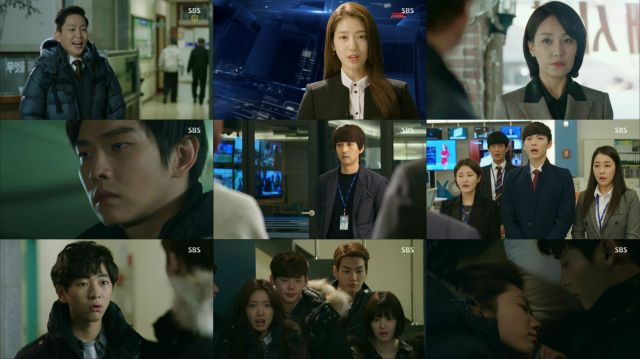 Incredibly, after an entire episode of intense investigation, trickery, and hypothesizing, the entire news report that the characters have been battling over is resolved within the course of just a few minutes. Such is the nature of news broadcasting. So much effort put into a short story that may reach a huge population. And yet most of those people probably won't even remember the broadcast in a few days. And as for the ones that will...well...

The nature of journalism ethics as it relates to the characters has once again been turned completely upside down. Dal-po even acknowledges this directly in a memorable argument with himself from two different sides of his own idealism. It's rather remarkable how much character growth he's gone from lately. Here we see that Dal-po has transitioned from from messy-headed scamp to serious moral expert to guy who's just found himself on the wrong end of the journalism issue that at this point makes up a substantial portion of the young man's ethical identity. It's a lot to take in.

What really dawns on the characters this episode is the sheer quantity of work they're going to have to do to get ahead in the field. Because while the first successful broadcast is nice, now everyone has to go out and find a new story, and that process is a lot harder than it sounds. In this light I'm a little amazed Cha-ok was ever able to get married and have a child at all. It's almost enough to make you feel sympathy for the woman.

Almost. While it's not clear yet whether there will be another intervening case, the history of Dal-po's past life remains an open discussion point. Jae-myeong is a frequent ominous presence in the background. Indeed, that entire story arc remains a lingering reminder that whichever reporter seems to be honest at this very minute, in the long run all of them are focused on creating exciting news stories. What may seem like obvious moral territory right this minute could quite literally change in an instant- because that's how long it takes for a broadcast to leave its impact.

There's only really one weak point in "Pinocchio" right now- the secondary leads. Beom-jo and Yoo-rae are useful insomuch as they fulfill their purpose as partners and rivals to the lead characters. But we still know very little about either one of these two personally. This isn't a huge issue, given how most of the drama's emotional strength lies in its ethical discussion and treatment of familial relationships. Regardless, it's a flaw that must be noted and hopefully improved upon.