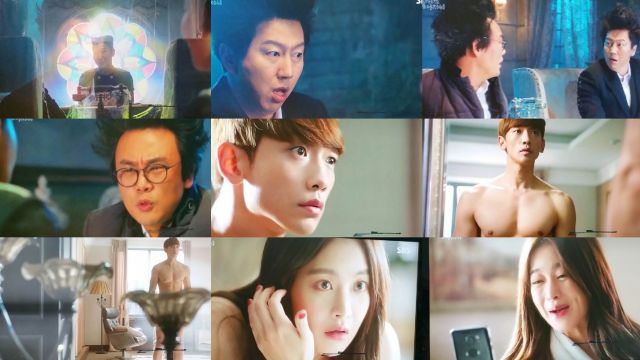 Maya (played by Ra Mi-ran) is the individual in charge of sending dead people back to the world of living temporarily. She's frustrated by how Yeong-soo and Gi-tak have interrupted her planned vacation, and warns these two that the reliving process is a fairly unsatisfying one with many arbitrary rules. Following that Maya nonetheless plops Yeong-soo in the body of Hae-joon (played by Rain), and Gi-tak in the body of Hong-nan (played by Oh Yeon-seo).

I don't know what to make of Maya's rules. They're so rigidly defined it's hard to see how Yeong-soo and Gi-tak are supposed to be able to accomplish anything. Naturally dead people shouldn't be allowed to influence the living willy-nilly but even so, it seems like it would be pretty hard to have any kind of story unless Yeong-soo and Gi-tak can do something. Especially since so far their attempts to ingratiate themselves in the lives of loved ones comes off as unconvincing and forced.

Sometimes these moments even seem pretty blatantly hypocritical. Remember in the first episode when Yeong-soo was abused by an obnoxious customer and forced to suffer awful indignities? This time Yeong-soo returns the same favor to one of his antagonists, and I kept thinking throughout the scene how Yeong-soo was being a jerk. Whether the man in question deserved this treatment was besides the point for me- a person shouldn't waste cosmic gifts on acting petty.

The villains themselves are mostly just small-minded bullies, so the moral distinction here is fairly important. Gi-tak struggles to pick up basic information about what happened after his death, in the process picking fights with nearly everyone who walks across his path. While it's somewhat amusing watching Oh Yun-soo bumble about with the personality of a massive gangster, in the end, we're looking at a person who thinks he can solve problems by punching people, oblivious to how this has not worked out that well for him in the past.

Maybe the challenge here is that Gi-tak is going to have to learn to play against type in order to do good. Given the trouble has has even getting I-yeon to hear him out, it's clear he's going to have to learn to be a better negotiator. As for Yeong-soo...his character journey appears to be limited to offering an excuse for the camera to linger all over Rain's manly chest. While there might be some visceral appeal to that, so far as story goes there's little of interest in "Please Come Back, Mister" as of yet.