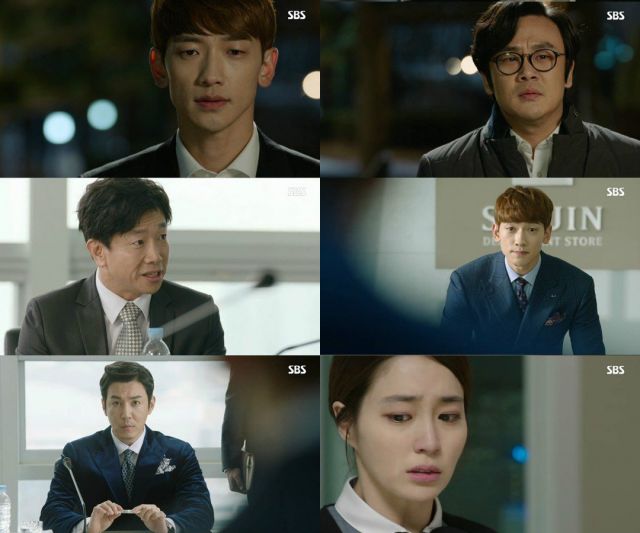 First, the good news. It would appear that the epilogue segments which involve Yeong-soo's Rain doppleganger getting railroaded so as to avoid interference with the main plot will in fact be a recurring feature in "Please Come Back, Mister". There's just something so delightfully sadistic about watching this poor man deal with constant artifically induced crises. Especially since it gives him almost as many excuses to take his shirt off as it does for Yeong-soo.

Which brings me to one of the main positives in "Please Come Back, Mister"- the way Yeong-soo and Gi-tak struggle to try and figure out how attractive people are supposed to act. Being thrust into a temporary situation, it never occurs to Yeong-soo and Gi-tak to so much as try and limit their attempts at being sexy to private quarters. I appreciate the moments when Rain and Oh Yeon-seo briefly turn into Kim In-kwon and Kim Soo-ro, because they do in fact look slightly less ridiculous as middle-aged men.

Unfortunately, Yeong-soo's antagonists are men who are unimpressed by his newfound sexiness. Gi-tak does briefly attempt to be cute and winsome, but it's too much of a conflict with his natural personality. Bizarrely, Gi-tak displays an an almost instantaneous appreciation for dumb horror movie parody jokes. He picks the perfect context for that. As usual, though, Gi-tak can't adjust to the physical limitations of being a woman.

"Please Come Back, Mister" is so far only just barely creative enough with its jokes to avoid annoying me completely. Take how Yeong-soo reacts to being thrust in the lap of luxury. He manages to fixate on the lighting fixtures of all things, and a mechanism which I've never seen as high-brow because it's so easy to use by accident. That ends up being the joke. Also more unexpected nudity. At some point the unexpected nudity is going to have to stop being funny, although that hasn't quite happened yet.

Anyway, as far as plot- by the end Yeong-soo has managed to dig up a lot of dirt on his supposed suicide. It's a scene I found interesting for all the wrong reasons. While Yeong-soo's theory does sort of involve liability, wouldn't the suicide explanation also be a liability, since it the motivation would be work-related? Maybe that's splitting hairs but I'd think the drunken accident theory would be preferable, given that the company can't really be held responsible for Yeong-soo being an idiot.