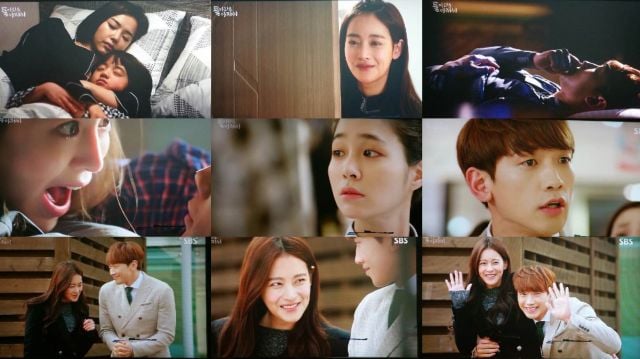 Yeong-soo really does not appear to have thought through the ramifications of his trying to romance Da-hye in Hae-joon's body. Da-hye is a grieving widow. It would be a little disconcerting if she was actually into Hae-joon's attempts at sexual harassment. Compared to Hae-joon, Ji-hoon's come-ons are fairly tactful. After all we've seen him do, I never expected Ji-hoon would come out looking like the better man this episode. Naturally, it helps that even if Yeong-soo succeeds, Da-hye would just be heartbroken again since Hae-joon will have to disappear without explanation, lest Yeong-soo break the rules.

By the way, I found it interesting how apparently Yeong-soo can break the rules in impulsive anger, yet not through sleepy dream-talk. Is intent the deciding factor here? I'm hoping not, because judging by intent Yeong-soo really doesn't have any good reason right now to remain in the world of living. Aside from the occassional appearance by Jae-gook there's no villainous presence, and the latter part of the episode is little more than an entertaining day trip.

The scenes between Da-hye and I-hyeon, by the way, are sweet in a way I haven't seen much in "Please Come Back, Mister". These women are both suffering from grief, and it's clear that they have much in common even though radically different life experiences have not given the anything in partivular to talk about. The meeting between their kids is also touching, because as of late, the kids haven't had much chance to enjoy themselves.

While there's definitely merit to many of these background elements, I still have too much trouble processing Yeong-soo, even on basic questions like what his goal is. In all fairness Gi-tak's justifications for sticking around are also fairly thin. But whereas Gi-tak is making an effort to get back into proper fighting shape, Yeong-soo is pushing weird, dubious management techniques on the department store staff. If I didn't know Hae-joon was just Yeong-soo in disguise, his behavior would come off as horribly erratic.

I think that might be a big reason why I'm not really getting "Please Come Back, Mister". Unless he's talking to Gi-tak or Maya, I tend to see Yeong-soo from Da-hye's eyes- as this strange wealthy heir who for unknown reasons is demanding a very creepy amount of access to Da-hye and her family. There's no real ethical justification for Yeong-soo as a Hae-joon impostor. The real Hae-joon, at least, gets a pretty good punchline in the epilogue.