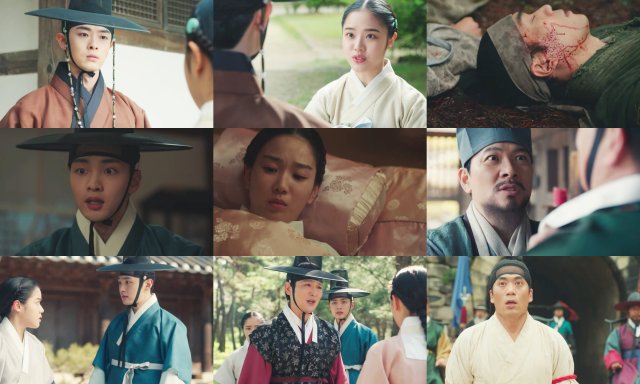 At the end of the last episode, Eun-woo declared that she was severing ties with her husband's family. My first thought was, can she do that? And then the second was, with her husband dead and his brother now going to jail for murder, well, it seems reasonable to ask for an exception. So now Eun-woo hangs out at Mr. Gye's clinic, intermittently learning medicine from Poong- a task which takes some urgency when a new murder occurs, with an ailing noblewoman clearly knowing something she's not letting on.

Overall the fourth episode breaks the episodic structure a little bit, because the case isn't quite resolved. We know who did it, of course, and have known for some time, and can make a guess as to the motive. The delay is entirely bureaucratic. Detective Jo just doesn't want to put any more work into the investigation than absolutely necessary. He's a weird character like that. Again, Detective Jo can tell there's something fishy going on with the case.

If this sounds repetitive that's because it is. The killer even does the same clumsy trick of faking a death blow. The cliffhanger is rather unnerving in that it's premised entirely around the idea that executions have to happen as quickly as possible and that there's no need to even bother with a trial. That's a bit medieval, which isn't necessarily inaccurate for the Joseon period. But it damages the finer points of a detective story when the setting impedes any actual detecting.

There's also the awkward fact of how the cliffhanger just further delays the resolution of an already pretty straightforward story. The structuring also works to make "Poong, the Joseon Psychiatrist" seem a little desperate for viewers to tune in next time, as if tvN had lost confidence in the drama's ability to maintain viewers. I'm not against the concept of cliffhangers in general, but "Poong, the Joseon Psychiatrist" is engaging mainly due to its appealing characters.

And they remain so. Man-bok (played by Ahn Chang-hwan) proves surpisingly intriguing as Poong's loyal manservant, who seems to have no useful talent aside from his prodigous strength. But alas, there's only so much firewood that needs to be split before he's out of stuff to do. It's a testament to the chemistry of the larger cast that Man-bok already fits in so perfectly with Mr. Gye's non-traditional family. Only Poong and Eun-woo are aloof- yet fairly naturalistic.