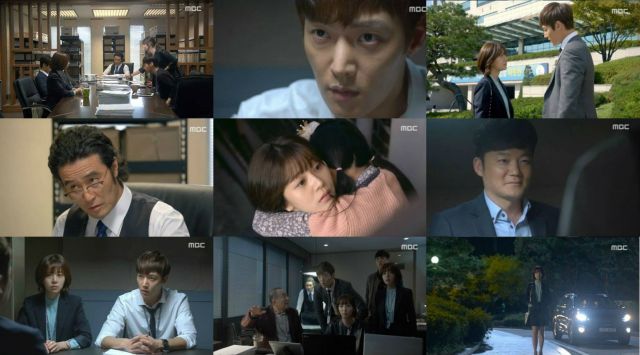 This drama quite literally wastes no time with introductions. It barely even offers any explanation as to the premise. Dong-chi (played by Choi Jin-hyuk) is an experienced criminal investigator. Yeol-moo (played by Baek Jin-hee) is a rookie criminal investigator who used to date him. OK, all the character relationships are cleared up? Then let's shut up about everyone's personal lives and get right to the mystery!

"Pride and Prejudice" marks a departure from Korean drama standards if only because there's so little focus on the personal element. As portrayed, everyone in the cast is an investigator first and a person second. Which is all just as well because it looks like there's always plenty of work to keep them distracted. The structure is a callback to the investigative television of the twentieth century, back before overarching plotlines became the cool thing everyone had to do.

Another modern fad "Pride and Prejudice" dispenses with is shock value. The mystery is a pretty transparent case of whether or not this particular man is a flasher. Of course, the story ends up going a radically different direction when Yeol-moo discovers evidence that the suspect has some connection to a much more serious crime in the neighborhood. But until that point the characters are quite focused on their goal, even as they have fun with it. There is, in fact, a good reason why they're making Yeol-moo run laps.

Maybe it's just because a lot of dramas lately have been ending with way too many loose ends, but I really loved the tight pacing here, as well as the fact that a relatively complicated storyline like this actually gets fully solved in just the first episode. "Pride and Prejudice" does excellent work establishing that its characters are talented professionals, simply by utilizing a structure that shows off their skills. The effect is an all around classy production that's extremely well-focused on telling a story. There's some unusually solid and confident stuff going on here.

The only iffy part of all this is that so far my admiration of the drama is mostly comparative. Whether "Pride and Prejudice" will be as successful beyond mere genre standards is as yet unknown. In any case, it comes as no surprise that writer Lee Hyeon-joo has written several Drama Specials. Whatever larger point "Pride and Prejudice" is driving at, at this point I have absolute confidence that we're going to get there.