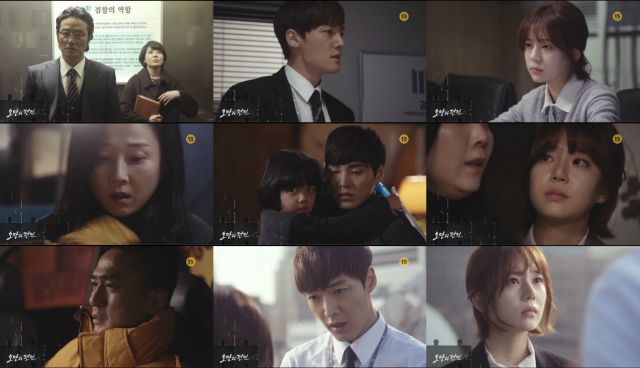 While I can understand why investigations into the case of Yeol-moo's brother are inconsistent, keeping track of theoretically ongoing investigations is a somewhat more complicated hassle. I like what "Pride and Prejudice" is doing on a thematic level. It's taking a simple case of sexual harassment and relating it to larger, systemic abuses of power rather than some ill-defined notion of patriarchy. All the same it's a little difficult to give that plot thread the full attention it deserves when the drama keeps zig-zagging around romance and parental issues.

Oddly, I think the love stories in "Pride and Prejudice" are intended to be taken as a bit of a palate cleanser from all the dreadful serious stuff that's happening. Unfortunately they don't really do that much to lighten the mood. One such cute scene takes place right after a character has been severely injured to the point that at first I wasn't even sure whether they were dead or alive. A sense of general perspective is really important at times like this.

Similarly, it seems rather odd the way that relationships between the older cast members seem specifically designed to promote more conflict than resolution. Yeol-moo's mother just sort of stumbles all over the place here. She's freaked out by the information that's been uncovered, and needs a bit of comfort in order to function properly. The trouble is there's just so much other stuff going on that the woman is really just getting in the way.

While it's tempting to write all of this off as clumsy screenwriting, I must once again grudgingly admit that in terms of greater narrative cohesion there may well be a coherent narrative point to all this. Consider the early episodes, where there were little to no personal dynamics at all affecting the investigations. In those instances the lead characters were extremely competent. It's only now that their judgment is clouded by personal threats and attacks on their personal lives that their abilities are wavering.

The thematic implications are obvious- we are all people, and we all have ghosts from our past haunting us. This kind of arc tends to be more common in narrative film than television, owing to the more epic scale. As presented in "Pride and Prejudice", though, there's definitely a larger exploratory element here. Consider how difficult it is to tell what Hee-man's motivation is at any given minute. It lends a pretty stark ambiguity as to whether the real enemy here is an actual character or just systemic abuse.