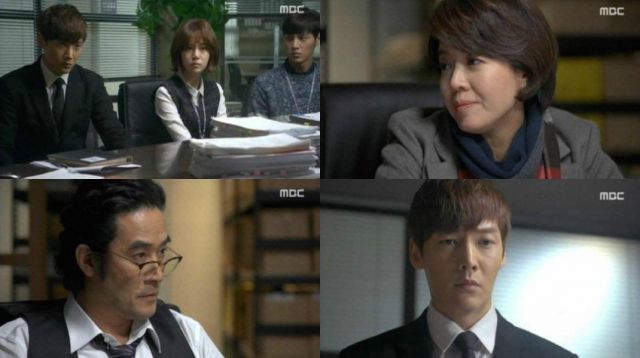 Note the way the characters talk to each other in this drama. It only got serious recently, and it was barely present at the beginning at all, but the only way I can really describe their tone is just hostile politeness. This reaches its most ridiculous point when, right after a huge massive streetfight, a character no one even recognizes shows up and starts speaking in the same measured tone. It's not even really sarcasm, just...a middle ground between open hostility and formality?

The Korean language gets a lot of bad rap for being overly hierarchal, and if nothing else, "Pride and Prejudice" certainly deserves credit for overtly dispelling that notion. Tone is really important, and as presented here, subtlety is absolutely paramount. How do you insult a person without letting on to other unrelated people in the room that there's a hostile working relationship? To the motivated person, there's always a way.

The scenes between allies tend to be the less interesting ones here overall, although they're still good investigative stuff. The cliffhanger resolves a question that had certainly been bugging me for awhile. When you compare the characters that we're focusing on versus the information the faceless villains have access to, not everything perfectly matches up. As usual, the overriding question is not how, but why.

In regards to those faceless villains, though, I really do need to note that there's only so much interest "Pride and Prejudice" can derive from having its characters strike out at ghosts. Which is probably why everyone takes so much gusto in going after the one guy who they're pretty sure can actually be arrested. The passive-aggressive language exericses are able to let off some steam, but ultimately, that's not enough. There's really not much point to being prosecutors if they can't aggressively go after bad guys every so often.

Truthfully, the main flaw "Pride and Prejudice" has is that it's too consistently good, especially in the way it only lets out small drips of information at a time. On an episode-by-episode basis this makes the drama difficult to properly analyze, though I imagine that upon rewatch there's all sorts of information that will seem much more obvious. There's a fairly frequent trend here of characters getting into really deep consideration only to lash out in frustration once they realize their evidence has hit another dead end and they have to find yet another increasingly out-of-the-way angle. That's certainly one way to build up a mystery.