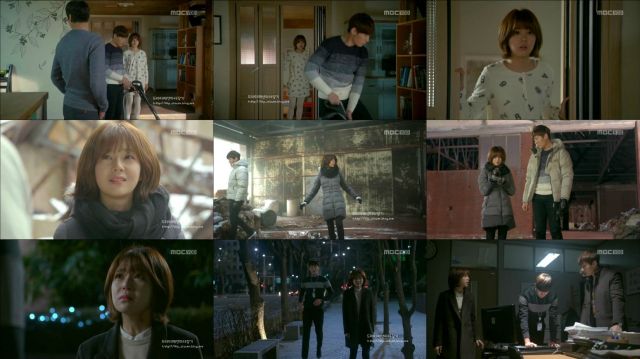 The characters are entering a period of convergence. One villain is explicitly and surprisingly given a face when he has an unexpected encounter with Dong-chi while he's out investigating with Yeol-moo. It's odd to see how in many ways the bad guys are in fact enabling the investigation through their hurried attempts at trying to pull a last-minute cover-up. It makes the lead characters notice activitiy in areas they might not otherwise see.

Now, one question does come to mind- why didn't they do a better job with all this at the time? Were they ashamed enough at how things went down to not want to dwell on it any more than necessary? That also lends some credence to the idea that the real reason for the current crisis is actually a blackmail scheme on the part of someone not directly involved with the events. A blackmailer might be more comfortable in expecting that all this won't backfire, given that he or she can't actually be traced to anything that happened.

As usual, it's all guesswork. "Pride and Prejudice" answers some questions only to leave others a mystery. This is exactly what it should be doing in order to stake viewer interest. And at the same time I can't help but feel a little tired sometimes, waiting for these issues to resolve. It's not a matter of the drama being bad, or even badly paced. I think what really makes or breaks this drama is characterization, which I haven't been feeling too strongly on.

You may disagree on this point, and I wouldn't blame you. "Pride and Prejudice" is an odd kind of hybrid drama. It's using a lot of the same tropes and backdrop of cable (or Western) mainstream detective shows, but with the same long focused generally emotional characterization inherent in Korean broadcast dramas. To me the combination just feels a little off- even though the quality of the writing is perfectly sound, the excitement factor just doesn't seem to be engaging correctly except when the drama hits a direct major plot point.

Ultimately the opening sequence is the accurate bit here, and probably what should have been more obviously foreshadowed from the beginning. This is all just a giant puzzle, with the main twist being that the puzzle pieces also represent major stumbling blocks in the troubled emotional past of the lead characters. All the same I wish there were a more obvious deadline for us to be running up against. There's not really much sense of urgency. This is all right for casual viewing but for whatever reason I keep watching this drama just expecting more.