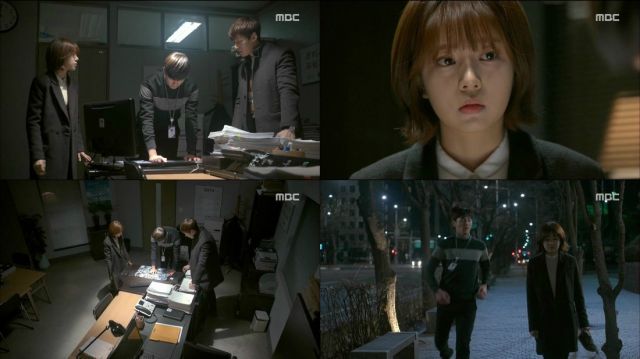 It's another confusing episode- confusing in a good way, I guess, since the modus operandi of "Pride and Prejudice" at this point is to keep us guessing. So, for that matter, do the villains. There are strong indications right from the beginning that they actually do want Dong-chi to succeed, to some limited unknown extent. Help ends up coming from a rather unexpected place right before the situation appears to turn suddenly and harshly lethal.

In a drama where the villains are more in focus, this would probably all seem coherent somehow. As it stands, "Pride and Prejudice" remains a puzzle. It's hard to imagine that these machinations could possibly work in the end, simply because there are way too many unknown variables at play. In particular, there are hints that different members of the conspiracy have different long-term motivations. At the very least, Hee-man has consistently expressed frustration with whoever's giving him orders at any given minute.

It's a stark contrast to the main trio. While the events of last episode clearly hit them hard, it's quickly established that there aren't any harsh feelings among the group. The tone at home is a fairly relaxing one- to the point I'm a little surprised nothing all that terrible has happened in that direction just yet. But perhaps that would be a little too outrageously evil. So far we only really know who was involved in the past kidnapping case, and to a limited extent how. The why question is the main part of the mystery that needs unraveling.

From a critical perspective, this naturally leads to the same problem I've had throughout most of the drama's focus on the larger plotline. Without a broader clue as to what's actually happening, it's difficult to parse the meaning of events on an episode-by-episode basis. There's a brief subplot here about office flirtation gone awry, but this just exists to provide some comic relief after another bout of intense passive-aggressive office showdowns.

The production values remain strong, and new revelations are following at the usual just right clip to keep the proceedings interesting without being so informative as to ruin the intensity of wondering what's going to happen next. In other words, anyone who's been watching the drama for this long will find another effective, tense episode to further whet your appetite. Be that as it may, there's always that one problem with consistency- it can only go on for so long before it gets dull and repetitive.