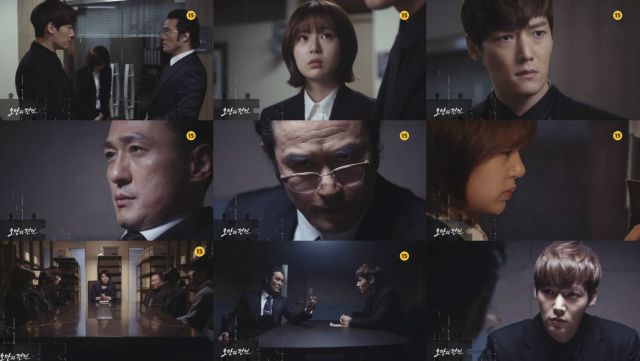 It's back to mostly internal soul-searching here, as the team analyzes evidence they already have rather than finding anything new. Oddly enough, even though Hee-man has been a huge factor lately, as well as the entire emotional impetus behind the cliffhanger, he's barely even present in this episode at all. The threat at this point is less the single person who may or may not be the mastermind as it is the gaggle of gangsters molling about.

They're not literal gangsters exactly but the overall threat remains the same. In some ways I have to admire "Pride and Prejudice" for its consistency. Even though action scenes aren't exactly necessary or even relevant in the context of a mostly legal procedural thriller, it seems like every episode is manage to cram at least one or two in. I suppose everyt once in awhile it's therapeutic to be able to watch characters physically lash out their anger or frustration instead of just sublimating it.

The romantic comic relief also shows up at semi-regular intervals, achieving mostly the same function. The main issue with all of this is that it's becoming clear these lower level plot points exist mainly to hide an uncomfortable truth- "Pride and Prejudice" is stalling. Episode by episode there's very little plot movement. Most of the runtime is taken up by character interactions which only very slowly actual move the mystery forward.

Whether or not you enjoy this (and I presume you do or else you wouldn't be watching the drama for this long) depends entirely on your personal sense of taste regarding how the action should progress in a mystery. Somewhat comically, the slow pacing of "Pride and Prejudice" is actually far more in step with actual police work than a more standard crime procedural. In real life these investigations take time, because criminals, especially high-level ones with a lot of social power, tend to act impulsively and only come up with the master plan later.

Or their underlings do. It's the same old story with Nixon- he didn't actually do anything illegal until the cover-up. It's from this standpoint that this episode's cliffhanger arrives, making it all too clear that there just isn't any obvious intuitive explanation right now for how the villains are behaving. Only the general cohesiveness of their attitude gives any hint that they have a clearly defined objective at all. So, just another typical episode of "Pride and Prejudice" really.